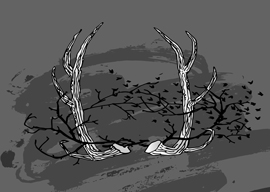 I suspect that when Ligotti put his dreadful worldview into so many words, weird fiction readers were more existentially jarred than they”d hoped to be”though their typical reasoning was that he’s a philosophical dilettante, too emotionally biased by his own psychiatric disorders (which he does go on about ad nauseam in interviews) to argue properly.

True, he is a weird egg. In over three decades of publishing, Ligotti’s output has been notoriously sporadic, and he rarely writes anything longer than a short story; like many modern authors the sinking likelihood of making a living at fiction has divorced his work ethic from the profit motive.

Even if he were motivated to push harder, selling his writing would be an uphill battle anyway. His horror is more intellectual than funhouse-scary”but that doesn”t mean it’s emotionally safe. His monsters are more mirrors than freaks, slyly finding back doors around our defenses against the terror of mortality. Ligotti’s fiction is often very funny, but murderously so. His characters are resentful and neurotic. I have to sleep with a light on like a five-year-old if I read him too close to bedtime.

But his writing is often so wryly, darkly subversive that it’s worth any curmudgeon’s time to investigate.

Ligotti’s most recent fictional work, a slim volume of two long stories called The Spectral Link, is his first fiction in over a decade. Unfortunately, it’s the last place you”d want to start delving into his universe. If they aren”t already sympathetic, readers may be turned off by the lead tale, “Metaphysica Morum,” as there he indulges his least admirable tendencies.

He’s said he prizes above all, in his writing and that of others, the presence of an author’s consciousness, a nous behind the story; it’s an idea that resonates deeply, and Ligotti’s authorial voice is usually a beacon inside the little hells he creates. But in “Metaphysica Morum” the signal is muddied by what appears to be Ligotti’s personal resentment of his experiences as a psychiatric patient. Wordier and whinier than I”ve ever seen him, he lets on that being clinically defined as broken has come to give him a clunky sense of pride.

But the second novelette in the book, “The Small People,” is back to crack form. Though it works the same themes of unreality and spiteful alienation as “Metaphysica Morum,” better imagery and humbler writing make it as nightmarish as anything he’s written. The awful sense that being a human is too weird for anyone to maintain sanity pervades the text: “Push, push, push. Chop, chop, chop. … I really had to work on those things that called themselves my parents.”

Still, those 47 good pages are about the least cost-effective way to get the best of Ligotti. His numerous story collections are cheap on Kindle; one could do worse than to start with the corporate horror novella My Work Is Not Yet Done“the funniest and my favorite”or with the bite-size weird tales of Teatro Grottesco, where he throws in some unsettling civic satire for political junkies. If you do have patience for an author’s philosophy and shop talk, he’s just released a collection of interviews: Born to Fear (with Matt Cardin). It doesn”t really matter where one starts, as long as it’s with the original creep instead of Pizzolatto and bloody HBO.