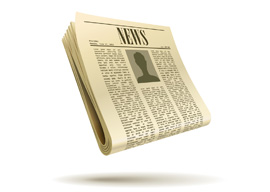 In a flailing attempt to scare voters away from a Trump presidency, the perpetually childless Ezra Klein sat down and warned America, “Tonight was a scary moment in American politics.” It was Oct. 9 and the fact that Trump said, “You”d be in jail” meant he was going to imprison all his opponents the same way Stalin and Pol Pot and Mao did. It was a ridiculous premonition and it’s part of the reason they lost.

If you want to talk scary, how about this “fake news” controversy? It started with some eccentric assistant professor‘s musings and is now being treated like some kind of reputable blacklist that shows exactly what news sources are a threat to America. Their idea of a threat to America, of course, is anyone who threatens the narrative. The same way Jill Stein’s crusade only investigates states where Trump won, these people define “fake” as “not liberal enough.” Fake news sites such as The Onion, The Daily Show, and my favorite, The Hard Times, didn”t make the cut. Her list included real news sources such as Breitbart and InfoWars, and the scariest part is how much credence it’s being given. Social media is taking it very seriously, and this is likely because social media is mad at itself for handing Trump the election. Of course, social media didn”t win the election for Trump, information did. Social media was just the vessel, and if your entire foundation is built on lies, information is your enemy. The phony capitalists at Bloomberg had hoped the free market might correct this horrible problem but now realize “There might be a need for the state to step in.” The president himself has claimed we need a “curating function” to handle this “wild-wild-west-of-information flow.” Later he complained to Rolling Stone that we are getting information from “completely different sources.” That’s right. The least competent president in history is telling rape hoax central the merits of the DNC handling all the information from here on out. Barack is ultimately calling for the abolition of facts and suggesting America take up some kind of state-run media the way Britain and Canada have.

“If you”re looking for fake news, you might want to check in on the people trying to shut it down.”

I”ve lived in both those countries. The scariest thing about state-run propaganda is how well it works. Talk to a Brit from the media class. They are stunned Brexit happened. They honestly believe a bunch of soccer hooligans took over the voting booths and separated Britain from the ray of perpetual hope that is the EU. In Canada they are consistently bludgeoned by the “Canadian Human Rights Commission,” yet rarely complain. They had two soldiers killed in one week, but the prime minister bursts into tears when an Arab immigrant says he likes it there. State-run media is very good at promoting the state.

So the left in America wants to get in on the action and it’s being done under the auspices of preventing fake news. What the hell is fake news? Madison, Wis., is replete with bumper stickers calling Fox “Faux News,” but as far as a literal definition, I assume it’s those cheap-looking WordPress sites where you can tell it was made by a mentally ill divorced man who hates the world. When Trump lost the popular vote I was searching for a site that said otherwise. There was one (it’s long since gone) that claimed he won it. Any normal person who cared could tell that this site, awash in Google ads and no comments, was not real. We know what’s fake. This is exactly why Wikipedia works. It uses the authority inherent in numbers and lets the free market of ideas weed out the bullshit. It’s also why the internet works overall. It’s about freedom, and freedom works.

If you”re looking for fake news, you might want to check in on the people trying to shut it down. This is always the case with the left. They say we need to cut out fascists and censorship and bigotry and they get people fired, shut down talks, and embrace Islamists in the process. Any parameters you set to ban fake news would mean the MSM would be the first to go. CBS insisted that George W. Bush was nothing more than a pampered rich kid during his time in the National Guard and that he didn”t fulfill his obligations. This was based on forged documents Dan Rather provided. MSNBC told us Obama’s victory sends a thrill up their leg like it was some kind of objective analysis. During Obama’s Reverend Wright controversy, CNN declared themselves a “Reverend-Wright-free zone,” and when he won, reporters discussed how they successfully “won over“ voters. Most recently they used their own cameraman as an example of an outraged Hillary supporter. Comedy Central’s The Daily Show proudly calls itself “fake news.” When Sean Hannity insisted spring break had changed and was now basically girls on Oxy getting gangbanged by a lineup of drunk males, Jon Stewart scoffed and called Sean “America’s oldest hall monitor.” As the fake news made these jokes, teenagers were being raped and murdered. Is that scary enough, Ezra? Panama City Beach changed its laws after the reports because they were real, and rape and murder aren”t funny. It was the MSM who told us Mike Brown was unarmed and “fleeing with hands up,” as Sally Kohn put it. How many deaths did that lie lead to? During the Ferguson riots, Zemir Begic was murdered for being white. He was killed by fake news and I”m guessing Ezra Klein wasn”t even aware of that story.