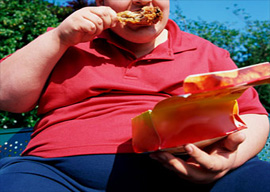 Which is also why women earn less. They”d rather be with their kids. That’s right. Women earn less because they choose to earn less. This hatefact drives feminists nuts”or nuttier”but it’s perfectly logical. Picture a boardroom where the top brass realizes they”re going to have to stay there all night if they”re going to meet tomorrow’s budget deadline. Which gender is more likely to say, “Sorry, my daughter has a dance recital and there’s no way I”m going to miss it”? Women put family over work more often than men, which means they tend to get promoted less often. When women don”t have kids they actually make more than men. Those of us in the eyeball community see this every day. It’s common sense. If women were a cheap labor source they”d be hired in droves the same way illegal aliens are.

The liberal brain has clogged arteries. Do they honestly believe Americans are fat because the nutritional facts chart at McDonald’s wasn”t prominently displayed? Everyone knows a healthy sandwich costs less than a dollar, but liberals keep telling us poor kids are fat because they can”t afford to eat better. They”re fat because watching TV doesn”t burn calories.

First Book is a DC organization devoted to providing America’s poor with books they can afford. Have any of these people been to a used bookstore? There is almost always a bin at the back with $1 books. I”ve even seen boxes of free books when the store is overstocked. America is lousy with books. First Book tells us there are “tens of millions of poor Americans” who can”t afford to buy books, but in a country where TV ownership only very recently went down from 99%, I”m guessing they”re not exactly deprived.

We”re at a point where we can”t explain away failure. If you”re living in the freest country in the world in 2012 and you”re fat, broke, and single, it’s probably your fault.