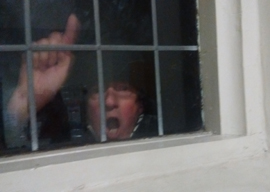 Be that as it may, these men were not just wide, they were large in all dimensions, and very solid, though not athletic. If one of them got hold of you, I think you would feel like the poor lady in the grip of King Kong on the top of the skyscraper: There wouldn’t be much you could do about it. As far as I know, however, they were not called upon to exercise their skills. I saw them going home afterwards, another day’s work done. What, I wondered, were their interests outside work? Philately? Bird-watching? One is often—though not always—surprised by people.

A German lady, trapped temporarily in the hall along with us, said that she had come to England nearly fifty years earlier because it had seemed so tolerant. Of course, there was no official doctrine of tolerance in those days, but since tolerance became almost an official ideology, everyone seemed to have grown angry all the time. At last, then, Herbert Marcuse’s famous concept, repressive tolerance, has taken on a reality or substance that it did not have when he first thought of it.

Are we losing the art of civilized disagreement? The answer, I supposed, depends on whether you think that we ever had it. I seem to remember that we did, but memory is fallible. Perhaps people were always bitter and twisted, and hated one another the moment a contrariety among them arose. Doctor Johnson talked for victory, not for truth, and Sir Joshua Reynolds says that he often stubbornly persisted in an outrageous opinion merely because he had first put it forward, long after he knew it to be wrong.

There is nothing new under the sun, but on the other hand, things change. I do think that people are angrier now than they were a few decades ago, at least in the West, and more liable to resort quickly to extreme expressions, even to precursors of real and serious violence. I suspect, though I cannot prove, that anger gives meaning to many people’s lives: I’m angry, therefore I am. Also: I’m angry, therefore I’m right. And what a good person I must be to be so frequently angered!