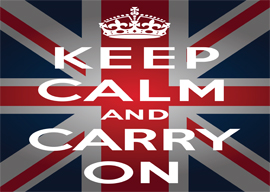 So much, once more, for the stories we tell ourselves, about our past and present.

Katie Hopkins went on to slam the “Keep Calm”-ers, reminding the living that “Carrying On” is a luxury the actual dead and wounded will never enjoy. For the rest of us, such low-grade “defiance“ is really just a fancy name for our shallow, back to normal, “ignore the Islam behind the curtain” selfishness.

And she’s right, because at least during the Second World War, Britons went about their business (in the rubble) secure in the knowledge that the authorities were, you know, fighting the enemy and not inviting them to move in next door, full suite of welfare benefits included, not to mention the guaranteed protection of their traitorous views by the host nation’s Thought Police.

(Did you hear about the post-Manchester garden party that was busted up by the Cambridge cops because someone played a song making fun of Osama bin Laden?)

I”m as Anglophilic as the next lowbrow nitwit, but only the likes of Tommy Robinson and, yeah, Katie Hopkins really keep me caring at this point.

The “Keep Calm and Carry On” lot was mostly pulped, so the Ministry tried out a few other propaganda slogans, with varying degrees of success:

“Freedom is in Peril” was also deemed ineffective, blamed on “the abstractness of the words, not one of which had any popular appeal.” Even during the planning stages the criticism had been raised that “Freedom” was rather an abstract concept and was “likely to be too academic and too alien to the British habit of thought.”