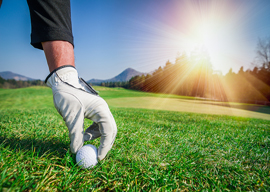 Crowds behave differently now. This is the case in other sports besides golf. Conventions dating from the early 20th century or the old amateur days are now disregarded. It used to be the rule that bad shots by any player were met with silence, good ones applauded by all. Now if a player on the other side”a European in America, an American in Europe”drives out of bounds, hits the ball into the water, or misses a putt, the mistake will be met with cheers. This may be deplorable (I think it is), but in an age when fierce partisanship is encouraged (and delights the TV companies because it adds to the atmosphere and makes everything more exciting), it’s not surprising. It’s something we have to live with. But let’s not pretend it’s absolutely new. The young Jack Nicklaus was on the receiving end of some nasty verbal abuse from members of Arnie’s Army as he threatened to dethrone their hero. It says a lot for both Nicklaus and Palmer that they emerged from the experience such good friends. One might add that at Hazeltine the players on both sides showed respect and admiration for their opponents” performance, and the atmosphere on the course was friendly and always sportsmanlike.

The change in crowd behavior reflects a change in society. For a long time, public displays of emotion were thought, in Anglo-Saxon countries at least, to be unmanly. Modesty and magnanimity in victory were the rule. We subscribed to Kipling’s lines about treating Triumph and Disaster just the same. Now you are thought to be a cold fish and inadequate in some degree if you don”t give free rein to your emotions. Letting it all hang out is the rule. The English gentleman’s “stiff upper lip” is out-of-date; so is the laconic American portrayed by Gary Cooper and John Wayne. We have gone back to the fashions of the 17th and 18th centuries when men readily shed tears in public; that tough nut, Oliver Cromwell, was described as a “greetin” devil” by a Scots Presbyterian minister, “greetin”” being Scots for weeping. It’s also the case that, on account of television, crowds at sporting events no longer regard themselves as being only spectators; they themselves are part of the show. The more extravagant the display of emotion, the better. So players are encouraged to “get the crowd going,” and they do so partly by expressing emotion themselves. That’s all part of the way we live now, and if people of my generation find it all a bit too far over the top, too bad.

Nevertheless there’s still, happily, a place for understatement. When young Thomas Pieters came off the green on Friday evening after winning his first Ryder Cup point in partnership with McIlroy, he was asked the apparently obligatory but asinine TV interviewer’s question: “How are you feeling?” There was no “over the moon” reply from the young Belgian. His cool and polite answer was: “Fine, thank you.” It was one of my favorite moments of this marvelous Ryder Cup.