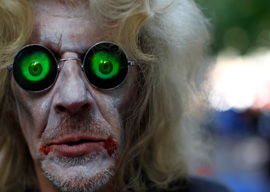 Whatever background money is being spent to organize this motley group of pretend patriots, you can be sure it is not intended to change anything.

Meanwhile, the Fourth Estate‘s bought-and-paid-for-decades-ago faces ask with their best earnest wide-eyed imitations, “Can this be the beginning of America’s Arab Spring?”

How does one know? Because in the Middle East, where despite adequate time they still haven’t quite gotten down the finer points of populist repression, a heavy hand is too often used. One doesn’t murder activists, one buys them with francs or flattery. The military should never be used in the Homeland. You risk setting off a real spark. The governing class has not been that stupid in America for nearly one hundred years now.

It is no mystery why, even when there are pertinent points and prescient concerns regarding the American system’s many faults, the media always shines the klieg lights on the unwashed goatees and mental deficients in the crowd. Always the usual characters of concern, with wild eyes and pugnacious countenances, are showcased front and center. Not one commentator ever asks, “If you want things to change, but the other side has all the money and guns, how do you expect it to happen peacefully?”

Instead, pure puffery. Let them have their little drum circles. Pleasure them with pretend importance from the one side. Make with the faux outrage and ridicule from the other. It’s all one gigantic charade.

There are more problems with the Western world’s economies than can be detailed in one essay. There’s the wholesale confiscation of hard-earned and invaluable public resources which are being literally stolen and handed over to private enterprise, with attendant fourfold increases in charges. The growing and rapidly accelerating disparity between the upper middle classes (25%) and the subsistence classes (75%), a far more immediate concern than the 99% versus the billionaires. The degree to which justice is a commodity almost unaffordable to the vast majority of Americans and the largely unknown extent to which we are entering a neo-feudal phase of general legalities. All of these are alarming. None of these are discussed. Nor shall they be on the television or in the drum circle.

“The movement” will dissipate around mid-October when the leaves change and the temperature drops. Then those West Side latte-drinkers will retreat back to their warm homes and try to impress pretty girls with their “revolutionary credentials” and the time they “almost changed things” by “speaking truth to power.”

Of course, one or two legitimate and honest protestors will stay the course, well-intended though misguided they may be. I empathize with them, as they will shiver in the cold without so much as a halogen bulb to mark their vigil. They are the only ones among the misfits who actually have something to say, and at least they are sincere in saying it. But then, when did speaking sincerely ever matter to power, media, or make-believe mass movements?