Four Lions: Truth is Even More Retarded Than Fiction 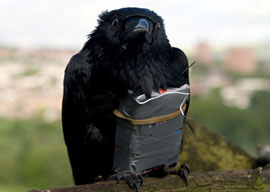 In his talkative Four Lions, the jihadist chavs constantly offer each other rationalizations for their homicidal plans. But mostly, they just like blowing stuff up.

That, and videotaping each other acting tough. The youngest bloke, Hassan, figures that if this suicide-bombing thing doesn”t work out for him, he”ll try a career in hip-hop. At a seminar on moderate Muslims early in the film, he rhymes, “We are the martyrs/You”re just squashed tomatoes” in his thick Urdu-Yorkshire accent before exploding the canisters on his belt. When they turn out to be confetti-spewing party favors, he’s resentful that the terrified audience had stereotyped him. “What? Just “cos I’m Muslim, you thought it was real?” Four Lions is like Spinal Tap starring Ali G.

You may be asking, “Yes, but can a comedy about terrorism be funny?”

Leaving aside the obvious moral question, how many high-velocity jokes based on British trash culture can an American audience get? Co-writer Jesse Armstrong also worked on last year’s Parliamentary comedy In the Loop. That film’s bravura dialogue turned out to be a little too much work for Americans to decipher.

It’s not promising that at the showing I attended, the aspiring mogul who had bought Four Lions“ American rights felt compelled to get onstage and apologize that Morris hadn”t let him put subtitles on the English dialogue. The executive then carefully enunciated and elucidated some of the more incomprehensible catchphrases, such as “rubber dinghy rapids.” (In other words, wait for the DVD with its closed captioning.)

The other problem with Four Lions is that Morris seems so impressed with his own bravery that he doesn”t have much to say. He’s especially leery of asking the tough questions that would offend Guardian readers, such as: Why are these Pakistani welfare spongers in England at all?

The answers would be unedifying. The first were imported in the 1960s to work in the mills. (Talk about the high cost of cheap labor.) Since then, they”ve been running “family reunification” immigration scams using arranged marriages between British-born girls and their first cousins in Pakistan. The unsurprising result of all this inbreeding is the high frequency of mental retardation displayed in Four Lions.