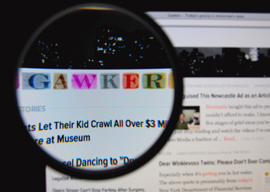 We shouldn”t be too surprised. For those too squeamish for war, social justice is the next best racket. If you”re an amoral hustler with no talent or job skills, just brand yourself an “activist” and you too can be raking in the Benjamins. Just ask Suey Park. She’s best known for launching the #CancelColbert campaign in response to a “racist” Tweet posted by Stephen Colbert … that was neither posted by him nor actually meant to be racist. As it turns out, Park is a professional activist who makes her living from consultations and speaking engagements. By engineering bogus controversies such as #CancelColbert and #NotMyChristianLeader, she gets free attention from the media, driving up demand for her services and making herself richer.

She’s far from the only example. Scratch a holier-than-thou social justice campaign and you”ll find oodles of cash at stake. Pax Dickinson, one of Gawker‘s most notable victims, was the CTO of Business Insider, one of Gawker Media’s biggest rivals. V. Stiviano, the mistress of L.A. Clippers owner Donald Sterling, was possibly pressured into releasing her “racist” tapes of the man by Magic Johnson, who’s been looking to wrest control of the Clippers from Sterling for years now. Morris Dees, founder of the Southern Poverty Law Center, is worth millions of dollars. Clearly, nobody is going broke overestimating the credulity of the American public.

As Ryan Holiday wrote in his now-classic book Trust Me, I”m Lying: Confessions of a Media Manipulator, this kind of chicanery has never been easier. With the Internet accelerating the news cycle to light speed, news organizations no longer have the ability to be slow and thorough. He who dies with the most clicks wins, and with sites like Gawker who make their bread off of clickbait, every newspaper and TV station has to be equally sensational just to compete. Not that journalists have any interest in getting the story right, anyway: as I learned during my brief experience in J-school years ago, the current crop of young reporters are committing plagiarism and fabrication on a scale that makes Stephen Glass look like Ambrose Bierce.

And now the self-appointed commissars of the left are being hoisted by their own petards. Nick Denton himself once said that “hypocrisy is the only modern sin,” which by his own logic makes him the Antichrist. I would have loved to have been a fly on the wall when West, Stewart, Erin Gloria Ryan and Jezebel‘s other staffers realized that their boss was treating them just as cruelly as they”ve treated every “misogynist” and “douchecanoe” they”ve set out to destroy. Their meal ticket came with a poisoned chalice.