God Save Women From Other Women 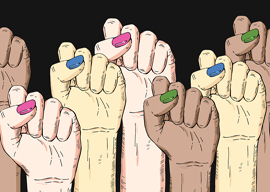 The greatest evil for women is that the more they buy into feminism, the more miserable they become. Take, for example, hookup culture, which is the culmination of the sexual revolution. Of course, women have much more to lose in it than men do. Besides getting pregnant, a woman may be raped, or raped and murdered. Although many feminists are quite mad in their conception of male sexuality—as if it were inherently criminal—it remains true that the anything-goes approach to sex that prevails today is a much riskier business for women, both biologically and in regard to safety. Now in a culture in which casual sex and promiscuity are norms, women are sure to experience a fair number of sexual encounters that are awkward, uncomfortable, or regrettable. Feminism, however, makes women believe they must be the same as men. Therefore, although hookup culture is even more harmful to women than it is to men, women must still accept it in the name of “equality,” because to go back to the old days of making men commit (whether in the form of marriage or at least in a relationship) in order to sleep with you would be to enact a “double standard.”

We can see here just how pernicious feminism is, with its insistence that the sexes be the same. The so-called double standard obscures women’s greater sexual power. Withholding sex makes women much more powerful, just as it makes the culture stable. If women are not having sex outside of marriage, or at least outside of relationships, then men are not having such sex with women, either; it all depends on whether women will yield to men’s advances. Making men commit in order to get sex means that much fewer men will use women for sex. It also means women will not be sleeping with men whom they hardly know, a practice that would significantly decrease the number of dangerous sexual encounters, and also those that women later regret for whatever reason. If sex outside of marriage were still shunned, then families would be more stable, since the scarcity of sex would compel couples to stay together. All this is to say that it would be the best thing for women to return to the old conventions about sex and dating. It used to be taken for granted that women, in keeping with their greater sexual power, have a greater responsibility to be responsible—that is, conventional—when it comes to sex. A return to that former role is highly unlikely, however, because owing to feminism the good sense of the past has been turned into lies in the service of the oppression story.

Indeed, that is a big part of what women (and men) now get from their “education.” Every year thousands of young women go off to college, where their naive and passionate young minds will be readily corrupted by older women. Goodwill, affection, and gratitude are replaced by envy, resentment, and distrust. A false and vindictive perspective is inculcated by women who appear successful and who embody young women’s own aspirations. What misery those feminists wreak! We might say, appropriating an old maxim, that woman is a wolf to woman. “Follow me—I can help you,” says the feminist. But all the while she is her own burden. The unhappier women become, the more they turn to feminism, which leaves them unhappier still. God save women from other women.