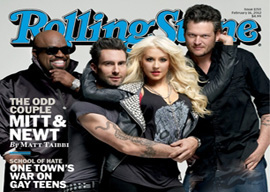 And why does this all matter so much?

Do you remember when adolescence, with its infinite demeaning traps, tried to beat you down? It pulled out every trick in the book: bullies, puberty, unrequited love, algebra, the lure of conformity. It is very likely that rock & roll kept you sane, kept you dreaming, kept you moving forward toward an amazing future. I don’t know you personally, but I know there was a time when rock & roll was your only friend.

Remember the everyday shame of middle school, when your body would do nothing right, and the mirror reflected only the violence of your own disappointment in your moon face, in your kinky hair, in your flat chest?

You survived because of rock & roll (and some books, and some British comedy).

This is why it’s important to tell the story right. Rock & roll was our life. It was the essential soundtrack to those terrifying years when our pocked skin and bursting bones were mocked and manipulated, when we were floored by first love and second first love and third first love and body-slammed by rejection again and again. Every dramatic, tragic, trivial, and convivial moment, there was a song in our head.

Rock & roll was the lover of the lonely and the lost, the thing that compelled us to leave our soul-subduing suburbs and reach for the starry spires of the city, where we would join other outsiders to form a kingdom of outsiders. Rock & roll was in our hearts every second of that voyage, and that’s why we must honor her by telling her story the right way.

That’s the micro, but here’s the macro: Rock & roll, more than anything else, is the sound of America’s disenfranchised, made electric; there is no better way to understand the ashes and thrashes and tears and triumphs of the American story than to hear that sound, to listen to it as it made its way from Parchman Prison to Laurel Canyon, from Rampart Street to the Whiskey a Go Go.