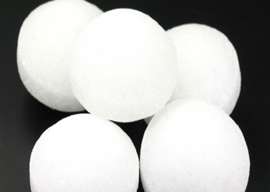 I never knew my grandmother well, but my recollections were powerfully stimulated when my wife bought some naphthalene mothballs recently in Turkey. (Proust had his madeleine; I have my mothballs.) She was delighted and bought six large bottles of them. This was because we had not long before returned to our house in France to find one of my suits with a small but almost certainly irreparable hole made by moths, cleverly located so that any attempt at repair would be immediately obvious. The newer products protective against moths had evidently not been as effective as my grandmother’s mothballs. (Would that not be an excellent title for a book: “My Grandmother’s Mothballs”?)

Naphthalene mothballs are now illegal in most of the developed world; you can”t buy them anymore. This is because of health and safety, the father, son, and holy ghost of the modern world. Naphthalene can cause hemolytic anemia and is carcinogenic, and is therefore satanic. I was about to say that it didn”t seem to do my grandmother any harm, but I don”t want to sound like one of those irritating patients who tells a doctor that he is not going to give up smoking because he had an aunt who lived to be 98 and smoked 60 a day since she was 15. Why does every smoker have such an aunt? (Actually, I, who have never smoked in my life, had one who lived to be 90.) It is hopeless to try to explain that epidemiology is not interested in aged aunts.

Anyway, Turkey had a lucky escape when the European Union turned down its application for membership, because if it had been admitted, the first effect would have been the prohibition of naphthalene mothballs. We in the European Union glory in multiculturalism and diversity, but we draw the line at mothballs.

With the zeal of the convert, or of the lapsed believer returning to the fold (she also remembers when old people smelled of mothballs), my wife has sewn mothballs everywhere in the house. It may be that I soon will smell like my grandmother, if I do not already do so.