Halloween in the Golden State 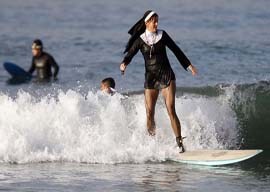 Traditional customs aside, the synthetic faiths which are so much a part of our state’s heritage also give Halloween a special fillip. Most notably Wiccans, adherents of an age-old religion dating all the way back to the 1920s, observe Halloween as Samhain (pronounced “SAH-win”), a sort of Celtic New Year. The Key to the Moon Coven, for example, will honor their ancestors this year in scenic Chatsworth (better known as the center of the American pornographic film industry). Theosophists, too, see a special significance to Halloween. California is a haven for paranormal activity of all kinds, and innumerable ghost walks and haunted tours are offered during this season.

But just as there are killjoys who cannot quietly allow others to enjoy Christmas, Halloween allows similarly dull folk the chance to enjoy raining on the parade. From his desert stronghold, evangelist Jack Chick annually unleashes his horde of comic-book tracts upon unwary trick-or-treaters. Numerous other evangelical preachers vociferate against the proceedings’ evil nature, allowing various atheists to prattle on about how stupid the Christians are. Each side is thus able to enjoy Halloween in their own way. It is truly a festival for everyone.

As a true Californian myself, I will celebrate Halloween in an eclectic manner. Alas, my amusements on that night will not include the “Trick or Drink” game invented by my college roommate’s late father-in-law. But I will carve a jack-o’-lantern in the fashion taught me by my father and give out candies to trick-or-treaters. The following weekend I’ll don a costume and go to a Halloween party in the Hollywood Hills. More personally significant to me will be the All Saints’ and All Souls’ Day Masses and prayer for my dead friends and relations.

However you choose to celebrate or denounce Halloween, it is a festival of the year’s dying, a reminder that however 2011 has been, it is on its way into the past with all the others. It is time to take stock—but also to have fun. So I wish you all a Happy Halloween.