Has the Bell Begun to Toll for the GOP? 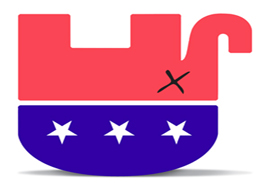 Fifty-three percent of all Hispanic children are born out of wedlock, with no father in the home and many of the moms themselves high school dropouts. Most Hispanic kids thus start school far behind.

In tests of fourth-, eighth- and 12th-graders, their scores are closer to those of African-American kids than whites and Asians. Their dropout rate matches that of black kids. Absent affirmative action, not only are America’s colleges and universities but her professions are going to look far more Asian and white than the national population.

Not a formula for social peace.

Not only do we seem not to know how to close it after four decades of plunging trillions into public schools, the country is tapped out. We are in the fourth consecutive year of trillion-dollar deficits, and our largest and richest state, California, just discovered its deficit has exploded to $16 billion.

And why should Hispanics vote Republican?

The majority of Hispanics are among that half of the population that pays no income tax. Why should they vote for a party whose major plank is that it will cut income taxes?

Government puts their kids in Head Start before public school and provides them with Pell grants and student loans after public school.

Government provides all these things, and what are Republicans going to do? They promise to cut government.

Again, why should Hispanics vote Republican?

Establishment Republicans say the party should support amnesty for illegal aliens. Yet this would make millions more eligible for federal programs in a country sinking in debt and mean millions more Hispanics going to the polls, and millions more coming to America in anticipation of the next amnesty.

How would that help the GOP?

By endlessly expanding Great Society programs, by lopping taxpayers off tax rolls, by supporting open borders and endless immigration from the Third World, the Republican Party, out of sheer nobility of character, has probably ensured its impending departure from history.