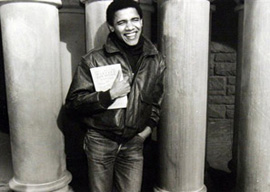 Trump is drawing crowds because he speaks in plain language and appears unintimidated by the high priests of political correctness.

As Rush Limbaugh notes, it was Trump’s demands for the birth certificate that turned the issue from a winner for Obama—it had been seen as a young president bedeviled by conspiracy theorists and bitter-enders—into an issue that had begun to cut.

When half of all Iowa Republicans, not a radical group, said they thought Obama was born somewhere else, and a fourth were not sure, the president, who had swept Iowa, was beginning to bleed.

The Donald had gotten under his armor.

As Newsweek’s Howard Fineman notes, it was the rising doubts of independents about why Obama still refused to release his original birth certificate that caused him to end two years of stonewalling.

If the president has been hurt, is it not partly his own fault for not releasing the birth certificate and ending the matter after he was elected?

And the demand for Obama’s test scores—is that racism?

Well, was it racist of the New Yorker to reveal in 1999 that George W. Bush got a score of 1206 on his Scholastic Aptitude Test (566 verbal, 640 math) or that Al Gore got a 1355? Was it racist of the Boston Globe to report that John Kerry was a D student as a freshman, who eventually rose up to a C and B student at Yale?

Was it racist of The New York Times’ Charlie Savage to report that Supreme Court nominee Sonia Sotomayor had described herself as an “‘affirmative action baby’ whose lower test scores were overlooked by the admissions committees at Princeton University and Yale Law School because, she said, she is Hispanic”?

If a White House correspondent stood up at a press conference and said: “Mr. President, Donald Trump is asking for your college and law school test scores. Do you believe you benefited from affirmative action in your academic career?” would that be racist?

Perhaps Obama might begin his answer as he did, two decades before, in a Nov. 16, 1990, letter as president of Harvard Law Review: