Have Condoms Penetrated the Catholic Church? 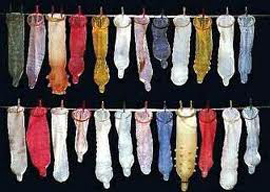 Since “basis” or “justification” cannot mean objective moral justification of something (condom use) which the Pope appears here to condemn, it must mean some kind of grounding from the person’s own perspective and/or a factual basis for some process of “moral awakening”, due to the good motivations involved. Well, that wouldn”t directly contradict the prohibition of condoms. But why on earth say this?

The Pope seems to be recognising an element of concern for others which (necessarily wrongful) preparation for wrongful acts – e.g the homosexual prostitute donning a condom for sex, or the pilot dropping the less-than-effective radiation suits to the inhabitants of a city as a preparatory act for nuking it – may nonetheless involve. Such people may indeed be moving in the direction of greater humanity in the midst of very serious moral evil (but mightn”t that make them more morally culpable too?).

The Papal spokesman, Fr Lombardi, later claimed that Pope Benedict had said his comments also applied to female prostitutes. A man using a condom who has sex with a prostitute is showing some concern for her and his own health; he is also, on at least one view of Catholic teaching, engaged in perverse (as opposed to natural) sex “ as is always the case with homosexual prostitutes. So while the heterosexual client’s choice to use a condom is better from one perspective, in that it shows a glimmering of concern for others, it is worse from another perspective.

Millions have, mistakenly but understandably, concluded that the Pope is recommending condoms “ at least for male and female prostitutes. But in any case, Christian life is all about living a life of the theological and natural virtues, and virtue is all about the formation of good moral habits. Is the beginning of the virtue of chastity, in particular, to be found in preparing to engage in sex with a condom? To appear to suggest this seems a betrayal of prostitutes who need to be helped out of their bondage.

Why does all of this matter, especially to those who think the Church is not a little crazy on the subject of sex? Well, if we care about our civilization and about the institution of marriage, we need to be aware of those forces which seek to tear down the one institution that still propounds an exalted view of human sexuality, and for that reason says a firm “No” to the many things that degrade our culture. However fallible we may be when it comes to sexual matters, we should not have to accept the agenda of those neo-Malthusians who like to flood countries with condoms under the guise of healthcare while refusing to give real aid to those in need. That they are hugging themselves with glee over the Pope’s remarks and subsequent silence is a reason to be worried. That they are praising him should make him sleep a little less easy at night.

Anthony McCarthy, an ethicist, can be contacted at [email protected]