How Could Anyone Hate the Globalists? 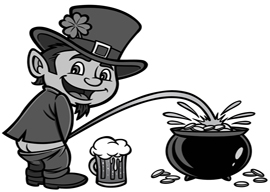 Sounds kind of anti-Semitic to me.

Let me tell you a little story—a true one, if that helps. You don’t even have to think about Jews in order to understand why many people hate globalists.

Despite what you might have heard, Ireland’s current prime minister is not the leprechaun on the cover of Lucky Charms cereal boxes, but rather a gay man of Indian descent. And his government recently became enmeshed in a scandal wherein officials bribed journalists to write double-page advertorials praising Project Ireland 2040, a scheme that plans to import a million foreigners into a nation whose total population doesn’t even crack five million. In other words, the government paid off the press to brainwash Ireland’s indigenous inhabitants into embracing their demographic replacement. For the most part, readers thought they were reading objective news articles rather than paid advertisements. As part of their payout, alleged “journalists”—who pose as the defenders of the people’s interests against the elites who would wish them harm—were forbidden from writing anything negative about Project Ireland 2040.

Now comes word that the tiny southern Irish spa town of Lisdoonvarna—population around 300—is the planned dumping ground for about 115 asylum seekers who will be neither Irish nor Christian, and if anything will be hostile to the strange customs and culture of their new hosts. A local hotelier whose property was the planned site of relocation efforts originally promised he would not sign the contract if the town’s residents didn’t want it—and they made perfectly clear that they didn’t—signed the contract anyway, opening the doors for the planned permanent “transformation” of the tiny Irish town into something that will forevermore be non-Irish in all meaningful senses.

According to American expat and current Lindoosvarna resident Michael Walsh:

Ireland is under the impression that these people will all become Irish, pretty much overnight, and everything will just continue on to be terrific. But, in fact, as history is showing us—in Sweden, France, and Germany—this is not necessarily the case.

Walsh says that the indigenous Irish aren’t raising too much of a stink for fear of being called “racist.” But the town’s residents never voted for their own extinction. They were never even offered the choice. And this is why people hate globalists—because somewhere across the globe, far out of sight and out of reach, people are making decisions on your behalf.