Hysteria, Bad Taste, and a Loss for Oklahoma 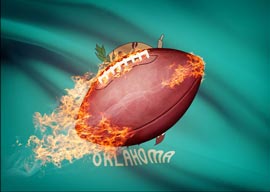 As for group singing of tasteless songs on buses, where do I start?  Circa 1962, that’s where. At that point in the history of the English-speaking peoples, or at any rate of that subset of them who played rugby for their all-boys secondary schools, it was the usual thing when riding the hired bus to an away game for the team to sing its way through a repertoire of traditional songs to which the adjective “tasteless” really doesn”t do justice.

An actual singing rugby team named the Jock Strapp Ensemble put out a couple of LPs of their favorites, but I can find only unsatisfactory fragments on YouTube. The great Jim Croce caught some of the flavor with his solo version of “The Ball of Kerrymuir,” although Croce’s last verse is a cop-out. I remember it as:

The village conjurer, he was there,
Doing his usual trick:
He pulled his foreskin over his head
And whistled down his prick …

I don”t recall any songs with a racist content; but then, England in 1962 was essentially, and very happily, monoracial. The issue didn”t arise.

So here we are, all the white liberal pussies in full self-righteous cant mode. “Chilling, disgusting and indefensible,” squeals this one, deploying three words that all have the same meaning.

I remember “indefensible” from my own run-in with the Thought Police. Being a rather literal-minded person, I got in touch with two of the people who”d called my “Talk” column “indefensible” and told them that, to the contrary, not only was it perfectly defensible, I was in fact willing to defend it in open debate. I didn”t hear back. In the Devil’s Dictionary of CultMarx Newspeak, “indefensible” does not mean “there is no possible way anyone could defend this.” It means “shut up!”  Likewise “chilling” and “disgusting.”

But here we are, and here is the President of OU, groveling and writhing. The worst consequence of the affair, from his point of view, is that high school football megastar Jean Delance has announced he won”t after all be attending OU next fall because he doesn”t want to sit in class with racists. There goes OU’s chance of cracking the Riemann Hypothesis.