If I Had a Sickle 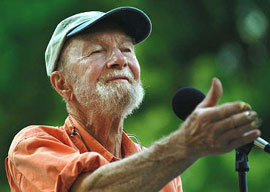 And while we often describe a musician approvingly as having “made a song his own,” Seeger did so literally, cannily sticking his copyright on all this “people’s music””thereby dying worth an estimated $4.2 million.

Some of that cash was swiped from a man named Solomon Linda.

Pete Seeger (or “Paul Campbell” as he sneakily styled himself on the sheet music) always wanted you to think one of his biggest crowd-pleasers, “The Lion Sleeps Tonight,” (you know, “wimoweh!” and all that) was a traditional Zulu work chant that he’d thoughtfully rescued from obscurity.

Except, as Mark Steyn’s detective work revealed, that song was written by the aforementioned Mr. Linda of Johannesburg, South Africa in 1939. There was nothing “traditional” or particularly “Zulu” about it. As for the “work” part, Seeger’s Great White Devil sleight of hand ensured that Linda got a grand total of 87 cents for his labors, while Seeger chanted all the way to the bank.

Now, we can say it was foolish for Linda to sell the rights so cheaply to Seeger’s record company, and a contract is a contract. And anyhow, someone with Seeger’s exquisitely tuned sense of social justice”he once claimed, “I want to turn the clock back to when people lived in small villages and took care of each other””surely took care of Mr. Linda by mailing a five-figure check to the poor fellow c/o his small village the moment his authorship was brought to Seeger’s attention.

If you were hoping against hope that that’s how the story turned out, I’d like to introduce you to another, less familiar, little ditty (one that Seeger didn’t steal) called “Easy to Be Hard.” A more accurate musical dissection of the average twisted white liberal heart has yet to be written, although National Lampoon’s folk pastiche “Pull the Triggers, Niggers” is a close second.

Speaking of songs, Seeger’s blatantly hypocritical career brings to mind a variation on that old Richard Jeni riff on “A Horse With No Name”:

Pete: You were born to bourgeois parents. You ended up a millionaire. Buy the freakin’ hammer!
Seeger did have an axe, though, which he reportedly used to try to cut Dylan’s power at Newport. If that story isn’t true, it should be.

At least latter-day folkie Bruce Cockburn’s much-mocked answer song “If I Had A Rocket Launcher” acknowledged his ambiguous feelings about power, politics, and peace. Seeger’s bottom line, and the delicious sensation of getting his bony butt kissed by other useful idiots, would never permit such introspection.

As for me, just hand me a shovel so I can toss some dirt on the grave of that wicked old fool.