In Defense of Bullying 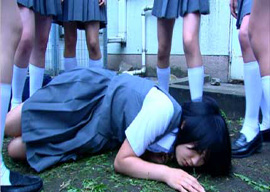 Bullying lacks the medical pedigree of those other fads. It lost momentum when it turned out the Columbine killers hadn’t been abused by their peers—quite the opposite.

However, anti-bullying regained traction as a cause when it added that all-purpose magic ingredient—teh gay!—which renders it immune to skepticism. Question the “fact” that bullied gay teens are dropping (or hanging) like flies and you’re an ignorant, homophobic hater!

In other words, gay “anti-bullying” campaigns are run by gay bullies.

Even liberals are starting to notice:

[Gay sex columnist Dan] Savage—whom I respect tremendously—played a tape of Michele [Bachmann’s] husband’s speaking voice. Bachmann has a tiny bit of a lisp—though it’s barely perceptible—and he slurs his words slightly. To Savage’s ears, it was a gay accent. Savage played the tape over and over, and reprised it several times throughout the podcast. He even did his own Bachmann impression, exaggerating the lisp and camping it up.

In other words, the man who launched the “It Gets Better Project,” an effort to stop the bullying of gay teens, was acting like a big bully

Even if the “bullying industry” wasn’t part of the insidious insinuation of gayness into our schools, it’s still another doomed, road-to-hell utopian scheme to reengineer human nature, and as such must be defied.

For every kid who’s allegedly bullied to death, how many not only survive but thrive, driven by an admittedly toxic urge for revenge?

Take the gangly Jewish kid who got beaten up when he lived in an all-black neighborhood (and later, an all-white one) and grew up to be Howard Stern, the multi-millionaire with the hot blonde wife and army of rabid fans. I can’t picture him ending up as anything more than a particularly amusing, eccentric taxi dispatcher without being literally pushed.

A pal in the T-shirt business sent me a link to someone else’s anti-bullying design. Its crude, old-fashioned message: If he hits you, hit him back. Alas, kids who do that today get suspended from school.

Although of course I don’t condone bullying, the anti-bullying movement is annoying enough to make me consider doing an (ironic) pro-bullying shirt. If only as a necessary antidote to the Toronto school that banned all balls harder than a Nerf ball in the schoolyard.

A teacher’s decision to promote homosexuality in class rather than teach the approved economics curriculum—and the school district’s endorsement of that—soon will be hitting the court docket, as a complaint has been filed by a student subjected to the instructor’s ‘bullying.’

When “zero tolerance” is the closest thing to math kids are taught, the law of unintended consequences inevitably, shall we say, kicks in.