In Defense of Degeneracy 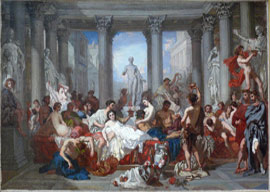 Mind you, I’m not even “defending” so-called “degeneracy.” I’m gonna be frank here—because Frank couldn’t make it, he called in sick again—I’m probably just as disgusted as you are by the surfeit of tattooed, pierced, herpes-addled, one-legged transgender mulattos sticking dildos up themselves on reality TV as you are. I’d likely agree with many of you that an endless empty quest for sex and drugs can be hollow and alienating and self-defeating. I even agree with some of your critiques that the traditional cultural bonds have been purposely broken by our managerial elites, and this causes much of the alienation and anomie that has so many people spinning out in bleak and meaningless lives.

I just don’t understand why you have to get all Amish about it. The Amish are no fun. I realize that a small clique of you youngsters are goin’ all Amish. I’d suggest you keep it fun, or you’re going to lose the rest of the kids.

Although many of my beliefs have changed over the years—it’s good to change your views when better views come along—I am ideologically consistent in the sense that at any given moment, I’m going to side with whoever isn’t behaving like a pious, meddlesome pain in the ass. So if there’s any ideological orientation that you want to finally pin on me, I’m OK if you want to call me an anti-moralist, because that rings true to me.

That’s not the same thing as being nihilistic or unethical, mind you. The main difference between an ethical person and a moralist is that an ethical person doesn’t feel the need to constantly SHOUT IN PUBLIC about how righteous they are and how others are morally defective by comparison and therefore should probably be punished and so should you if you don’t march alongside them in their malicious crusade of scalding hellfire.

When it gets right down to it, I don’t care nearly as much who you are or what you believe as I do whether or not I could stand being in your company for five minutes. And if you’re a self-righteous bore who constantly has your nose jammed up everyone else’s business, I likely won’t last a minute with you.

Lighten the hell up and laugh. Life is brutal and short. On your death bed, I doubt you’ll regret you didn’t point enough fingers at others nearly as much as you will the gnawing sense that you didn’t laugh enough.

So before you die in a fit of shame and regret, I’d like to cheerfully suggest that you take that finger you’re always pointing at others and stick it up your ass. With the way you’re always talking about “degenerates,” you’d probably like that, wouldn’t you?