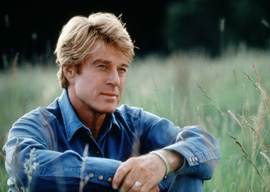 Their asinine musings about how “the rest of America” can be improved are no longer surprising, but they still make for entertaining reading.

This year, Redford kicked off the festival with a tone-deaf address affirming the event’s solidarity with the discredited and dismantled Occupy movement:

We show stories of what people in America are really dealing with, and really living with, against a consequence of having a government that’s let them down. People can come and say, ‘God, at least we’re seeing how people are really living in America, and what they’re up against.’ We square away on the 99 percent.

To (poorly) paraphrase Joni Mitchell on Woodstock: If you’re going to the Sundance Film Festival to see “how people are really living in America,” be sure to bring thousands of bucks in disposable (but hey, probably tax-deductible!) income. A room at the Marriott Park City runs over $450 a night during Sundance. And don’t forget to book your flight with Southwest (a “Leadership Sponsor”)!

Redford himself doesn’t fly commercial, of course–even though the man who regularly “decried the world’s dependence on oil” was a well-paid spokesman for United Airlines. Those are a few “inconvenient truths” we Canadians were recently reminded of after he and some other Hollywood millionaires insinuated themselves into the domestic debate over construction of our Northern Gateway pipeline. The pipeline never crosses the 49th parallel, but Redford, Leo DiCaprio, and Kevin Bacon (both private jet owners) have loudly denounced it based on dubious information from suspect sources.

When ticking off the proposed pipeline’s multitude of sins—“Crossing the territories of more than 50 First Nations groups”—Redford neglected to mention its possible impact on northern British Columbia’s “movie star economy”: In the unlikely event of an oil spill, Goldie Hawn might have to cancel her fishing-lodge vacation.

Speaking of vacation properties, Redford is selling off lots in the so-called Sundance Preserve for $2 million a pop while opposing construction of an “eco-village” close to his Napa Valley estate.

If accusations of hypocrisy trouble Redford’s tousled head, he doesn’t let it show in public. Maybe he’s a better actor than we realized. Or maybe he really is as dumb as he looks. It takes a special kind of stupidity to think that any normal person will want to see his next film.

Over twenty years after Running on Empty came out and more than ten years after Bill Ayers told The New York Times (in its 9/11/01 morning edition, no less) that he regretted not setting more bombs, Robert Redford’s next movie sees him playing “a fugitive Weather Underground radical who has been in hiding for 30 years.”

I suppose it makes for a nice change from Weather Underground radicals who teach at major universities and hang out with the president.

No doubt when the film, called The Company You Keep, tanks at the box office, Redford will issue a condescending statement bemoaning the ignorance of America’s moviegoing public. Thank God he doesn’t have to rely on us plebes, though. The 2012 Sundance Festival has just wrapped up, but it doesn’t take a weatherman to know which movie will top next year’s roster.