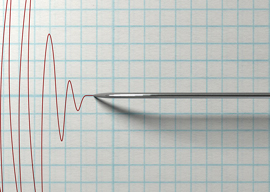 The producers had planted two fake lies with the experts beforehand. They told him 1- that I”d cheated on my wife and 2- that I was going to pretend I read her texts. The truth is I”ve never cheated on my wife and again, I do read her texts. Each of the two investigations “discovered” I had cheated on my wife and never read her texts. They were both so arrogant about their results it was disturbing. One of them said, “Looks like you haven”t been a very good boy” with an evil grin. I truly felt like I could have had a random bucket on my head and a bunch of wires strapped to my feet that didn”t go anywhere. It wasn”t about the equipment. For example, in both cases, the butt pad results were so far down, they were off the screen. The investigators didn”t even scroll down to check them. My anus could have been completely full of shit for all they knew.

After the test, we told the experts they were wrong and they shrugged it off as a rare exception. I got out of there as soon as possible.

The trouble with exposing this scam so late in the game is billions of dollars are at stake. It has completely embedded itself into our legal process. The American Polygraph Association alone lists 2,500 members. Polygraphs put people in prison. Sex offenders on probation receive the test regularly and if they violate it, they have violated their probation. In the UK, they”ll go back to prison. All government workers requiring security clearance have to take the test including private contractors working for the government. If they fail, they”re out of a job and on a permanent blacklist.

I contacted Williams after his trial date was set and asked him how he was doing. He said he was genuinely scared and wasn”t happy about having to spend $25,000 on a lawyer. However, he also said, “In a way, I”m kind of looking forward to it. I like the idea of explaining exactly what is wrong with these insidious Orwellian machines, and I can”t wait to see the government try to defend them.” In order to convict Williams, the federal government has to prove that these machines are reliable. It only took me a day to discover how totally impossible that task would be. “That’s the good news,” he told me over the phone. “The bad news is it’s the government who gets to decide if they presented a good case or not.”

I”ll be following the trial and keeping everyone up to date on my site because this isn”t just about Doug, or even polygraphs. It’s about the freedom to challenge the government. As Bertrand Russell put it, “One should respect public opinion insofar as is necessary to avoid starvation and keep out of prison, but anything that goes beyond this is voluntary submission to an unnecessary tyranny.”