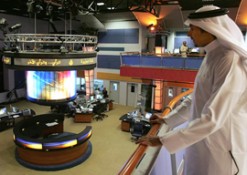 But the true revelation here is the Qatar-based and privately owned Al Jazeera, of which I had only been aware because the American media had falsely accused its TV news network of airing terrorist beheading videos. At various times, both the American government and various Middle Eastern governments have sought to censor Al Jazeera, although only the Americans have been accused of aiming missiles at its offices.

Since I am no fan of Islam, especially where its influence is powerful enough to infiltrate governments, I expected Al Jazeera to be little more than sand-scorching Quranic hate-speechifyin” against all things Western. Instead, I found what appears to be the most truly objective major news organization currently in existence. I didn”t expect to see a sympathetic news story about Hurricane Earl that didn”t include the word “karma” or the phrase “Allah’s retribution.” I didn”t expect that a superficially anti-Islamic story about a Sri Lankan maid who accused her Saudi employer of driving nails into her body as punishment would present convincing arguments from both sides of the disagreement. I didn”t expect that when Al Jazeera writes about the Israeli-Palestinian conflict, it carefully notes that both sides claim Jerusalem as their capital and doesn”t dare offer an opinion about which side may be right. I didn”t expect its opinion piece about the Ground Zero Mosque controversy to call 9/11 “an act of lunacy and hatred.” Above everything else, I didn”t expect its paid opinionators to question whether it’s dangerously simplistic to view things in terms of “Western” v. “Islamic,” nor to question whether the reputed civilizational divide is as sharp as we”ve all been led to believe.

An Al Jazeera opinion piece about Pakistan’s flood crisis offered perhaps the most rational foreign-policy advice I”ve seen since 9/11 changed the world”if America truly wanted to neuter terrorist networks, it would instantly win millions of Islamic hearts by taking only a hundredth of the untold billions it currently spends on trying to chase down the Taliban and spending it to help Pakistani flood victims. In the long run, feeding starving people tends to win their affection far more effectively than dropping bombs on them. That’s the sort of logic that refuses to take sides, especially when it’s delivered without a hint of bitterness or condemnation.

Al Jazeera’s editors display a general civility utterly lacking from Pravda and nearly all of the mainstream American press. If it’s indeed a propaganda tool, the only message that’s getting across to me is that Arabs can be reasonable.

My only minor complaint is that some of its rhetoric has been inoculated with progressive thought-viruses that lead normally intelligent and rational writers to use loaded terms such as “Islamophobia” and “the xenophobic right.” Such thinking is neither Islamic nor journalistic, so I”m not sure what’s going on there. Then again, such restrictiveness in the name of tolerance has also led Al Jazeera to ban all defamatory comments from its message boards, so if you want to see fanatics stewing about “evil Zionists” and why Jews need to be destroyed, you”ll have to visit Pravda’s forums instead.

It’s a mistake to draw gross generalizations about either Russia or the Middle East based solely on the editorial decisions of those who run the English-language versions of Pravda and Al Jazeera. But if my little experiment is in any way related to broader political realities, Americans should worry a lot less about the Middle East and start worrying about the Russians again.