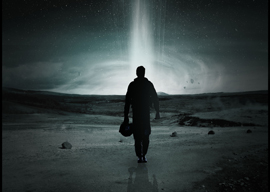 For decades there has been debate among fans of Heinlein’s three cult novels as to whether he was, deep down, a militarist (Starship Troopers), a hippie (Stranger in a Strange Land), or a libertarian (The Moon Is a Harsh Mistress). But Coop’s speech in Interstellar sums up Heinlein’s most consistent attitude: the Midwesterner was extremely proud that Americans pioneered the continent and forged a republic. The Nolans share that nonironic patriotism.

Of course, not even as strong-willed of a reactionary artist as Christopher Nolan is wholly resistant to his age. The space travel parts of Interstellar are reminiscent of Heinlein’s elegant 1956 juvenile Time for the Stars, which explored the twin paradox of relativity. In a 2009 essay on that Heinlein novel, writer Jo Walton offered her assessment of what would be different if it were written now. Some of her guesstimates sound much like Interstellar:

Earth would be dying because of global warming and pollution, not simple over-population. The book would be four or five times longer, with much more angst. The focus would be on relationships, not on adventure.

It’s a little hard to tell you what Interstellar is like, because it comes in six different film formats. Those who saw it in the most extravagant IMAX version report that the visuals are awe-inspiring but the sound mix is a disaster, with incomprehensible dialogue tromped all over by an even more bombastic Hans Zimmer score than in Nolan’s Inception. Bass thuds so deep and loud they may have thrown speakers out of whack in IMAX theaters all across the country have been reported.

On the other hand, I saw it in the cheapest format. The audio was a delight, but the image, while less claustrophobic than in previous Nolan movies, was nothing special compared to Gravity.

Finally, Nolan’s last two movies have been ambitious but not meticulous. Interstellar has better fit and finish than 2012’s The Dark Knight Rises, but I”ve suspected that Christopher Nolan’s movie-every-two-years pace is becoming too constrictive for the scale of the Nolans” ideas. For example, Kubrick worked for almost four years on 2001.