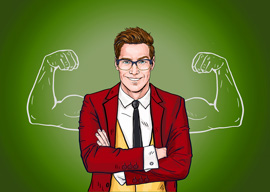 What started as a dare among Proud Boys has become the core of their existence. Though the press likes to focus on the coded racism it insists lurks within the group, most Proud Boys will cite #NoWanks as what’s improved their life the most. It gets young men off the couch and talking to women and it gets married men away from their computers and back into bed with their significant other. (Gay Proud Boys are exempt from #NoWanks because they are doing just fine for intercourse.)

Third Degree
While retaining the principles of the first and second degrees, the third degree involves getting a tattoo that says “Proud Boy.” Dozens of men have this tattoo. One man got it on his forehead and another covered his forearms with it. If someone has a problem with tattoos, branding is permitted and at least one man has done exactly that.

Though sexual intercourse is encouraged, Proud Boys have an endgame and it is to settle down and have kids. They have absolutely no respect for feminists but venerate the housewife so much, they are actually becoming quite popular with women. “I was shocked when I first got the analytics back,” says Jack Buckby, the head of Proud Boys U.K. and the founder of ProudBoy Magazine. “They call themselves Proud Boys” Girls and they”re our second-biggest demographic.” It may seem counterintuitive that a men-only group would have such a big female following, but nobody wants men to be men more than the women who depend on them. “Proud Boys saved my marriage,” says PBG Gabriela Finch. “I was completely done with it, but he won me back and fought hard for it.”

Proud Boys want what’s best for women and when Ann Coulter came up as a possible speaker for the most recent New York meeting, members expressed concern that having a woman there”in any capacity”would violate the rules. When Ann heard about this conundrum, she responded thusly:

NO! I support men-only organizations, strongly. There ought to be some places where men can go just to relax and not have to be on duty, be chivalrous and protective of women, pull out chairs, buy drinks, and avoid burping. Once the idiot feminists got rid of exclusive, antique-y all-men clubs like my father used to belong to, you know what became big? STRIP CLUBS! It was the closest men could get to being around just men: no girls”certainly no ladies, who would need to have their chairs pulled out and coats held for them. No worries about having to be gallant there! Burkas and strip clubs are two sides of the same beastly coin.

The fact that this group has exploded so quickly is a testament to how completely finished young American men are with apology culture. They tried being ashamed of themselves and accepting blame for slavery, the wage gap, ableism, and some fag-bashing that went on two generations ago, but it didn”t work. So they”re going with their gut and indulging in the natural pride that comes from being part of the greatest culture in the world. It’s very freeing to finally admit the West is the best. That’s because it’s the truth.