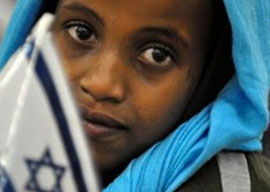 Soon came murmurs, then grumbles, then full-throated shouting about how the dark-skinned Third World non-Jewish primitives threatened Israel’s demographic integrity, how they speak a different language, worship a different God, seem unwilling to assimilate, and how they steal jobs and depress wages. Rightly or wrongly, they were accused of infecting the Promised Land with all manner of degeneracy, stupidity, and icky African filth. They were fingered for sending the crime rate up into the ionosphere, although official Israeli parliamentary data would seem to contradict this. As is the rule in these sorts of pogroms, the infiltrators were blamed for straining the national housing, healthcare, and educational systems. Critics complained that Israel was suddenly receiving more illegal immigrants than legal ones.

As the intruders” numbers swelled, so did the ferocity of the rhetoric against them. Eli Yishai of the Shas party said the unwanted new guests had rendered southern Tel Aviv into “the country’s garbage can” and were routinely raping and infecting Israeli women with HIV. (In 2009, possible germophobe Yishai prognosticated that the infiltrators would come bearing gifts of “hepatitis, measles, tuberculosis, AIDS, and drug [addiction].”)

Last Wednesday, the Shas party’s website featured an open letter addressed to “the Sudanese,” accusing them and their sub-Saharan cohorts of creating a “society personifying a social time bomb of robbery, violence, sodomy, as well as assimilation alongside the destruction of the institute of marriage and the proper family unit.”

Shas is quite the mean-spirited entity. In 2010 Ovadia Yosef, the head of the party’s Council of Torah Sages, declared, “Goyim were born only to serve us. Without that, they have no place in the world”only to serve the People of Israel.”

All righty there, mister. Guess we both know who’s not getting a Christmas card from me this year!

On May 23 at an Israeli protest against illegal African immigrants in south Tel Aviv, Likud parliament member Miri Regev took things up a notch: “The Sudanese are a cancer in our body,” she told the crowd. “We will do everything to send them back where they came from.” Although 52% of Israeli Jews agreed with her statement, Regev apologized”not to the Africans, but to cancer patients and any Holocaust survivors who may have been offended by the metaphor.

Emboldened by such comments, Israeli nationalists stormed into the streets, smashing and looting African-owned shops, chasing and beating random Africans, setting trash cans ablaze, throwing firecrackers at police horses, firebombing houses, and tossing a Molotov cocktail into a kindergarten courtyard while chanting things such as “THIS IS NOT AFRICA!,” “SEND THE SUDANESE TO SUDAN!,” and “BLACKS OUT!” Toronto’s Globe and Mail christened these events “race riots“ that created “a problem of biblical proportions.”

To be fair, it ain”t as if the Torah encourages the Israelites to act warm and fuzzy toward perceived interlopers.

In late May as the kettle really began to boil, Benjamin Netanyahu warned that the illegal immigration problem “threatens our existence as a Jewish and democratic state.” He prophesied that “If we don”t stop their entry, the problem that currently stands at 60,000 could grow to 600,000….”

Hey, look on the bright side. At least it’s not six million.