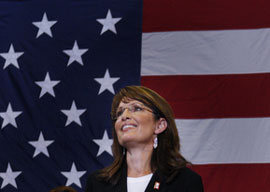 I used to attribute these panic-stricken outbursts to the childless left’s dawning realization that they’d pulled a reverse Dean Martin. (In one of her many memoirs, Shirley MacLaine recalls Martin joking that, having fathered so many children, he had to eat standing up because he had “screwed himself out of a seat” at the table.)

Likewise, the future belongs to those who show up. Liberals at home and abroad are confounded and frustrated that their indifference to reproduction may result in a “table” crowded with the multiple offspring of “red state” hicks like Palin.

But what if they’re worrying about nothing? The Census Bureau just reported that for the first time in American history, deaths among white Americans now outpace the white birth rate.

This is great news for self-hating Caucasian liberals, whose plan to “elect a new people” involves importing millions of reliably Democratic Mexicans to cast the votes their own nonexistent children won’t be able to cast.

The elite right’s contention that “Mexicans are natural conservatives” defies the evidence of anyone’s senses. How exactly do teen pregnancy, littering, animal cruelty, dropping out of school, and drunk driving constitute “conservative values”? Then again, the only Mexicans these Beltway types ever see are the “hard working” ones who mow their lawns and scrub their toilets.

Which brings us back to Jeb Bush, who I predict will switch parties and run for president as a Democrat in 2016 despite his mother’s declarations that  “we’ve had enough Bushes” in the White House.

And if Palin somehow gets the GOP nomination that time around? Maybe we’ll finally get to have that “debate about race and fertility” that we should’ve had a long time ago. But by then it will be too late.