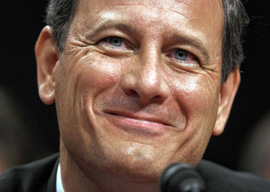 Did Roberts look at that individual mandate and conclude that it passed the constitutionality test? Or did he first decide that he did not want to be the chief justice responsible for destroying the altarpiece of the Obama presidency and sinking that presidency—and then go searching for a rationale to do what he had already decided to do?

Here we enter the area of surmise.

In the view of this writer, Roberts desperately does not want to be seen by history as merely a competent but colorless member of the conservative bloc on the Supreme Court, another reliable vote in the Scalia camp. He does not want Anthony Kennedy, the swing justice, to be making history, while he is seen as a predictable conservative vote.

John Roberts aspires to be a man of history, to have this court known to historians as “the Roberts Court.” And if there is to be a decisive vote in future great decisions, he wants that vote to be his.

He wants to be seen among the cognitive elite, in this capital city that voted 93-7 for Obama, as a large and independent thinker. And with this decision on Obamacare, for which he will be remembered, he has taken a great leap forward to establishing that new identity.

John Roberts likely has ahead of him a quarter of a century as chief justice. If he wants to be written of as another John Marshall or Oliver Wendell Holmes, and not Roger Taney, he must pay the price the city demands. If he does not wish to be remembered as a tea party justice, he must deliver the goods. And John Roberts just did.

Already they are saying of him that John Roberts has grown.

Liberals will never again see him in the same light. Nor will his old comrades. To attain the first, John Roberts is willing to accept the second. He has made his decision. John Roberts is moving on up.