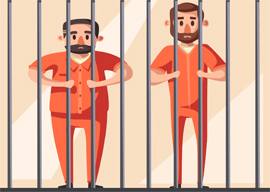 Quite a number of the prisoners preferred being in the prison to being at liberty, at least for a time. “There’s nothing for me on the out,” they would say. On the other hand, they feared to be lifed off, as they put it; that is to say, to be given a life sentence, as in “The judge just lifed me off.”

The drug addicts had their special argot, of course. The name for heroin changed regularly, but generally prisoners would say, “I’m on the brown.” A day after their arrival in prison they would say, “I’m doing me cluck” or “I’m clucking,” meaning that they were going cold turkey, that is to say experiencing withdrawal symptoms, among which were the piloerection that gave the special appearance to their skin.

“Don’t you mean you’re gobbling?” one of my pedantic colleagues would ask them. “Turkeys gobble; chickens cluck.”

Of course, the addicts exaggerated their symptoms greatly. I refused to use their argot. When they said, “I shot up,” I always said, “You mean you injected yourself.”

The acme of prison wisdom as relayed by an old lag to a first-timer was to “get your head down and do your bird,” that is to serve your time without causing any difficulties or making a fuss.

Almost certainly, prison argot has changed since I retired. One of my favorite reference works is Eric Partridge’s A Dictionary of the Underworld, British & American: Being the Vocabularies of Crooks, Criminals, Racketeers, Beggars and Tramps, Convicts, the Commercial Underworld, the Drug Traffic, the White Slave Traffic, Spivs. It was published in 1950 and is a work of immense and even intimidating erudition, especially when one considers that it was only one of its author’s many such dictionaries (it is 804 pages long). What is striking about it is that so few among its entries are in current use; and furthermore a word as universally used in British prisons and slums as nonce (for sex offender) was then unknown. Even bird in its precise current usage was then unknown.

But in language, as in life, nothing is gained without loss, nothing added without subtraction. In 1950, “shirt rabbits” were lice; a “wooden kimono” was a coffin; “yellow peril” was prison vegetable soup. Ah, the world we have lost!