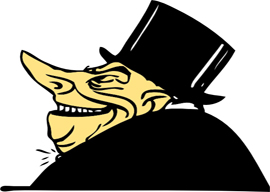 There is, however, something particularly unsettling about the fundraising frenzy in which Rove has been involved at least since April, according to a New York Times feature story from September 25. In April, Rove brought together at his home a band of trusted friends including former Vice President Dick Cheney’s daughter Mary and Bush fundraiser Fred Malek to plot a strategy for collecting corporate wealth and making it work for candidates and issues that Rove and his associates support.

Collected mostly through American Crossroads, the donations became vital to the GOP, because the party’s national chairman, Michael Steele, is a glaringly incompetent functionary chosen for his skin pigmentation. Steele combines flashy suits and verbal posturing with a disastrous fundraising record. It might be that Rove favored Steele’s ascent not only as an expression of minority outreach but also because it would allow him to control the GOP’s energy and funding. By now Rove has achieved his goal, as the bowing and scraping to him on FOX fully shows. Funds raised are serving his personal purposes but also the political direction that Rove helped give the Bush Administration.

Although Rove would like to keep the religious right in the big tent, he rarely disguises what he thinks about this constituency. In 2008 he stated on FOX that there is no need for a noticeably religious candidate for president: “The religious right will vote for the GOP no matter what.” For anyone who reads Rove’s memoirs, it would be hard not to notice his lack of religious fervor. Why he’s also a Republican as opposed to a Democrat is an open question.

Perhaps as someone from a troubled home, who dropped out of college, and was involved in two failed marriages, the GOP has furnished him with grounding. But what Rove has done as a fixer has not always been impressive. Except in 2004, when he helped Bush increase his share of the Hispanic vote, he has been far from an outstanding strategist. His minority outreach backfired in 2008, when Rove, who also advised McCain, fell between two stools, neither energizing the conservative base nor doing well among minorities. His record as a trickster stretches all the way back to 1970, when he broke into the headquarters of Illinois Democrat Alan Dixon, who was running for state treasurer. Rove falsified Democratic campaign literature and then distributed it in what he now calls “a youthful prank.”

While he deserves at most mixed grades as a strategist, he earns even lower grades as a speaker. Rove’s style is deadly dull, and only Bush nostalgia can account for his continued popularity on the GOP circuit. His gift of gab is even less impressive than his strategic skills or conservative convictions. But given his expanding power in the Republican Party and his ability to sell himself to the holders of corporate wealth, such minor flaws are not likely to affect his celebrity. His autobiography, which the GOP and movement conservative foundations have tirelessly hawked, Courage and Consequence, includes two errors in the title. Rove has rarely exhibited “courage,” and certainly not as a “conservative,” and if he has incurred consequences for anything, it has not been for his courage or conservatism.