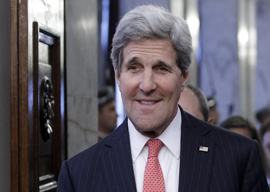 But even if Kerry was being honest, isn”t referencing 9/11 a slightly insane way to put down Trump? Especially when Kerry combines demands to keep our borders wide open with demands to continue bombing Muslims in their home countries? (Kerry responded to 9/11 by voting to authorize Bush to invade Iraq.)

Kerry even called attention to a graduate who was the victim of porous borders and government negligence:

I mentioned Victoria McGrath earlier, who was injured in the Boston Marathon attack. So Boston and Northeastern need no lessons in how important it is to win the battle against terrorists.

But, of course, the Tsarnaev brothers were in America as refugee guests of the American government, probably because their Uncle Ruslan had been the son-in-law of the CIA station chief in Kabul.

Similarly, Kerry brought up the smartphone-equipped flash mobs of migrants besieging the West, but as a reason not to defend our borders:

We know that there are millions of young people across the globe with no jobs, no opportunity, but they have smartphones in their hands. They can see what the rest of the world has. And in the seeing of that, they also see and know what they don”t have….

Instead, that’s a reason not for defense but for more war:

There used to be a famous song during World War I, “Over There,” sang about the distant shores where our soldiers traveled to fight. But in our time, in your time, there is no “over there”; in a digital, well-traveled world”in a global marketplace”those distant shores are practically always right at our doorstep.

There’s an empirical debate over what fraction of Chancellor Merkel’s Million Muslim Mob are war refugees versus economic migrants, but Kerry assured the grads that the real danger is America minding its own business:

And yet the specter of isolationism once again hovers over our nation.

Kerry climaxed his speech with an inspiring story about all the patriotic Americans who sacrificed their lives propping up Chiang Kai-shek’s regime in the 1940s:

That is the most that anyone could have asked of them. It’s what history demands from the United States of America. And it’s what the future asks of you.

Of course, what Kerry left out was that America’s involvement in China was perhaps the biggest foreign-policy disaster in American history, leading immediately to the Korean War.

China is the world’s largest example of how borders make people happier. You may wonder how the Communist Party can continue to rule in China, despite all the catastrophes of the Maoist years. It’s because the Chinese feel that, horrible as the Cultural Revolution and the Great Leap Forward were, at least Mao threw out the foreign devils.

Nationalism actually works pretty well. Do we want to toss away today’s hard-earned world order out of Kerry-level boredom, faddishness, and shallowness of thought?