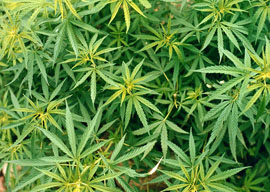 I knew a pothead who for years did nothing but work on a perpetual-motion machine. Instead, all he created was a perpetual-unemployment machine.

Still, I love smoking pot. It improves my marriage and makes my friends so hilarious I often wonder why they don’t have their own show. I watched The Others while baked and became so petrified, I hid in my bed as a tub of ice cream melted all over the floor. It was awesome.