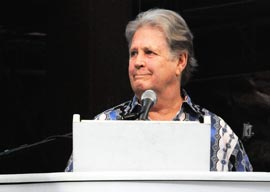 In the second story of Love & Mercy, Cusack plays a much older and more subdued Brian with a wistful awareness that youthful promise doesn”t always work out.

Love & Mercy revives the debate about what made 1965″67 the peak era for pop-music creativity since the end of the jazz era. Was it the rising tensions engendered by the Vietnam War? The baby boom? Or was it the drugs?

There was a definite generational advantage, although it accrued most to those born just before the baby boom kicked off in 1946, such as John Lennon (b. 1940), Bob Dylan (1941), and Mick Jagger (1943). Wilson and his most influential fan, Paul McCartney, were born two days apart in 1942. They all benefited from a huge cohort of younger kids looking up to them.

But Wilson’s life epitomizes pundit Mickey Kaus” point that musical biopics are always plotted around the happy ending when the innovator finally overcomes his chemical dependency; but they leave unstated how he never really came up with anything terribly new again, suggesting that maybe it was the drugs all along.

The most obvious exception to this rule of 1960s musical creativity was the influential James Brown, who despised drugs during that period. But then I don”t like Brown’s “every instrument a drum” dictum as much as Wilson’s “the studio as an instrument” philosophy.

Wilson was the most rapid embodiment of Kaus’ theory. He started smoking weed in December 1964 and dropped acid for the first time in April 1965, immediately conceiving the wonderful “California Girls.” By the end of 1965, his music was leaving rock & roll behind, mutating into some sort of late-Protestant spiritual music with references to the tradition of Handel and Bach. After Pet Sounds“ sales proved disappointing, his abrasive cousin Mike Love, a sort of junior varsity Lennon to Wilson’s McCartney, got him to focus on a rocker, which turned into the baroque “Good Vibrations.” Trying to top it with Smile, Brian cracked up spectacularly.

As a sociable Southern Californian, he didn”t really have anywhere to retreat to (other than Hawaii), so he spent the next quarter of a century as the music industry’s most publicly conspicuous drug burnout/martyr to his art.