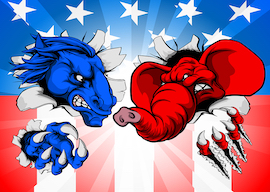 Today we will answer the question: May a president ask a foreign country to investigate corruption if it serves his “personal, political” interests?

But, the impeachment fanatics assert, by asking a foreign leader to assist in an otherwise legitimate corruption investigation, Trump has committed a monstrous crime — because he was pursuing a “personal political interest.” To wit: Trump was trying to harm his political opponent, Joe Biden.

Apart from the blindingly obvious fact that you can’t commit crimes and then escape justice simply by running for president, Democrats take official government action for “personal, political” reasons all the time. Frequently, they do so for the sole purpose of harming their political opponents.

“As long as you mention it, the House Democrats’ investigation of Trump’s phone call to the Ukrainian president has been undertaken for personal political reasons, too.”

How about the Obama administration’s endless investigations of Ferguson, Missouri, police officer Darren Wilson? As was obvious from the outset, Officer Wilson had done absolutely nothing wrong when he fatally shot Mike Brown — something even Obama’s corrupt, subpoena-defying attorney general, Eric Holder, had to concede after reviewing all the evidence.

Those massive Department of Justice investigations were undertaken to gin up the Democratic base in order to help Hillary, who proceeded to honor Mike Brown’s mother on stage at the Democratic National Convention.

In the most perfect example of a president demanding investigations for no other purpose than serving a “personal, political” interest, in 1999, when Hillary was gearing up to run for the Senate from New York against Mayor Rudy Giuliani, President Bill Clinton (her husband) launched investigation after investigation into the crown jewel of the Giuliani administration, the NYPD.

If President Clinton had actually cared about police brutality, there were dozens of police forces that should have been probed before he’d ever get to New York.

Such as, for example, the city Bill and Hillary lived in.

In 1999, as the NYPD was virtually eliminating crime in New York City, there were a grand total of 11 fatal shootings by police officers. That’s 0.28 fatal shootings for every 1,000 officers.

In the end, Giuliani withdrew from the race to treat his prostate cancer, but when President Clinton was demanding these investigations, Rudy was crushing Hillary both in the polls and in political contributions.

Speaking of whom, Hillary used her position as secretary of state to overthrow Libyan strongman Muammar Qaddafi, leading to the murder of a U.S. ambassador and several other Americans in Benghazi, as well as creating the refugee crisis currently engulfing Western Europe — all for her own personal, political reasons.

As was dramatically revealed in Hillary’s email exchanges with her unofficial adviser, Sidney Blumenthal, her motive for deposing Qaddafi was to display her foreign policy chops, apart from that lunkhead Obama, who was, as Blumenthal sneered, “intent on seizing defeat from the jaws of victory.”

Blumenthal egged on Hillary to keep the pressure on Qaddafi, promising her a major political win. When Qaddafi was ousted, Blumenthal exulted: “First, brava! You must go on camera. You must establish yourself in the historical record at this moment. … You are vindicated.”

Soon thereafter, Qaddafi was beaten to death in the desert by rebels who posted graphic video of the murder online. Cackling with delight at the initial reports, Hillary positioned herself alongside Julius Caesar: “We came. We saw. He died.”

The Obama administration spent millions of dollars and millions of man-hours on a purely political investigation to hurt Trump and help elect Hillary.

As long as you mention it, the House Democrats’ investigation of Trump’s phone call to the Ukrainian president has been undertaken for personal political reasons, too. So was Biden’s withholding of a $1 billion check from the president of Ukraine to protect his son’s sleazy business deal.

We can play the “personal, political motive” game all day long!

At least when Republicans do it, the Middle East doesn’t explode in jihadist fury, the crime rate doesn’t skyrocket, people don’t die or lose their livelihoods — and there’s real corruption being exposed.