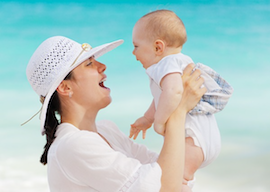 Kyl Myers is a gray-haired Brooklyn woman who thought it’d be a good idea to name her baby “Zoomer Coyote” and withhold its gender identity from the world until Li’l Zoomer is forced to make that choice all by his or her lonesome. Kyl—I’m assuming it’s pronounced “kill” and refuse to be persuaded otherwise—and her partner say they’re raising a gender-deprived baby because:

How thoughtful of you, Kyl, to foist all that rhetorical poppycock on the fruit of your weird-ass loins. On her personal website, which appears to exist merely for the purpose of not revealing her baby’s gender to the world, Myers has an entire page devoted to her child’s genitals, which she insists are nobody’s business even though, well, she devoted an entire page to them on her website:

Generally, when people know the sex of their baby, they assign one of two genders: penis = boy, vulva = girl. As soon as a baby is assigned a gender, people tend to treat them in specific, gendered ways. Gender socialization contributes to sex segregation, sex stereotypes, and micro-aggressions that result in gender inequalities in childhood and adulthood.

I sincerely hope this child doesn’t grow up with 55-gallon steel drums fulla psychological problems, but I suspect that he or she will.

“Miranda” is a blonde-but-butch Swedish woman described as “an LGBT-activist and mother of a two-and-a-half-year-old child.” She says that when she first got pregnant with her pale-white theyby, she found it odd that others were “so eager to figure out my child’s genitals.” The all-white Miranda doesn’t want her all-white, gender-neutral child to “grow up in an environment dominated by white people.”

Yeah, that child is going to have problems.

Even though we all know that gender is a meaningless social construct, it turns out that those people whose job it is to randomly assign you a gender at birth are amazingly accurate. They’re right in over 99% of cases. What are the odds?

Hey, parents of “theybies”: You are robbing your children of their fundamental identity, and it may end up destroying them as human beings. As soon as they are able to understand the words, tell them whether they’re a boy or girl. If you withhold this crucial information from them, your children should be ripped from your arms screaming, placed in a healthy home where the parents understand the difference between a pole and a hole, and you should be sent off to gulags and forced to perform manual labor—gender-neutral manual labor, mind you—for the remainder of your unnatural life.