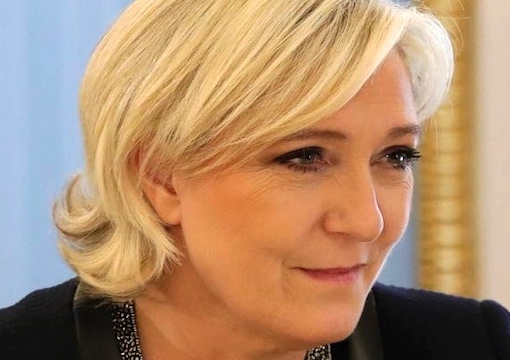 What appalled the American deep state and its media courtiers about Donald Trump’s election victory in 2016 may have been dressed up as an ad hominem attack, but it had more to do with the fact that he did not come up through channels approved by America’s political class. Now France’s état profond is equally disturbed that another blond maverick—albeit blonde—has a good shot at the French presidential elections next year, but for different reasons. Politically, she makes Trump look tame.

Marion Anne Perrine Le Pen’s name is easier on the ear than “Donald John Trump,” although the feisty 52-year-old from the fashionable Neuilly-sur-Seine district of Paris is known as “Marine.” Her background as a lawyer suggests a standard-issue European politician, but European lawyers rarely join (although they often represent) organizations such as the Front National, as Marine Le Pen did at age 18. At that time her father, Jean-Marie Le Pen, was party leader, and was on record as saying that HIV sufferers should be segregated from society, President Chirac was being bankrolled by B’nai B’rith, and the French soccer team didn’t represent the nation as it contained too many black players. In offense terms, and to borrow a term from the French card game baccarat, this was une maison pleine. Full house. He left out only Muslims, and his daughter would more than make up for that oversight.

“Le Pen is being taken very seriously by a nervous establishment before the 2022 election, and her popularity is a litmus test for European politics.”

In 2011 daughter replaced father as party leader, and moved with sharp political expediency to temper Jean-Marie’s more two-fisted comments. Whereas he called the Holocaust’s gas chambers “a detail of World War II history,” she described the same as “the height of barbarism.” Her sleek remodel of the party performed better than tipsters predicted in the 2012 election, and the establishment took notice. Madame Le Pen discovered that the French judiciary is just as politically weaponized as elsewhere.

In 2015 Marine Le Pen was tried and acquitted for incitement to racial hatred after comparing Muslims praying in the streets of Paris to the Nazi occupation. The same year, she retweeted videos of executions carried out by ISIS as a comment about the brutality of that regime. For this faux pas she was in court again in 2018 with a recommendation that she be admitted for psychiatric testing. “This regime,” she said, “is really starting to scare me.”

The French run presidential elections using a knockout system, with a first round of voting followed by a runoff between the two remaining candidates. The rebranded Front National performed well enough in the 2017 election—winning 21.3% of the first-round vote against current president Emmanuel Macron’s 24%—to make the French chattering classes choke over their salade de géziers.

Le Pen is being taken very seriously by a nervous establishment before the 2022 election, and her popularity is a litmus test for European politics. She is a genuine conservative, and for all their history of radical revolutions and Paris Communes, a solid swathe of France remains both conservative and fiercely nationalistic.

France is famously an agricultural nation, and its produce has a dual role. Wine accounts for 15% of agricultural revenue but is also an emblem of France, part of national mythology, and its producers want to keep it that way. When I last spent time in France, in Vaucluse, a southern region and home to Côtes du Rhône and Châteauneuf-du-Pape wines, my father knew several of the local vignerons, who shared not just a profession, but also a mutual set of traditions and genealogy. These are people whose daughters marry their neighbors’ sons. They appreciate immigrants, but seasonally, to pick grapes at harvest before returning to Bulgaria. These wine-growers also vote for Le Pen.

Now, with the next presidential election just a year away, Le Pen’s next tilt at the top job in the world’s seventh-largest economy has had a familiar effect on political opposition everywhere, as her opponents triangulate and try to ascertain which of her ideas can be adapted for their own use without scaring the horses. President Macron, for example, recently withdrew his support for a Muslim politician pictured in a hijab on local election flyers. But this is low scoring, and Le Pen has support from bigger hitters.

The first of a brace of letters to the Macron administration, and warning of impending civil war, came from retired army generals. They were dismissed by both government and media as yesterday’s men, but when a letter from serving French military personnel followed, Le Pen wasted no time extending a welcome to the armed forces as a potential voting bloc.

Next, when a poll showed the majority of French police following suit and expressing support for Le Pen, France’s political fixers began to realize that the next election might not revolve around convincing some péquenades (sort of French for “hicks”) that Muslim immigration is just what France needs, but whose side the forces of law and order would take in any civil conflict. Those same forces have spoken with Gallic bluntness about their main concern: Islam.

France has around a 9% Muslim population, but small numbers can do big things. In Europe, Muslims tend to ghettoize an urban area, bolster it with immigrants, impose sharia law slowly but surely, take local council seats, form their own parties, and so add another jigsaw piece to the caliphate. Retired head civil servant Philippe Lazar did suggest changing the timing of elections to prevent undesirable results. But that was not to stop the Islamists. That was to stop Le Pen. The E.U. is petrified at the thought of Madame Présidente.

Marine Le Pen has to be very careful. She knows the threat of Islamism, but has learned from her father’s rhetorical rough stuff, the almost total media hatred for her, and her appearance before the French politburo, that you have to speak softly but carry a big stick. She has also been vocal about the French equivalent to the Trumpian “swamp,” and 2022 could see the return of Madame Guillotine.