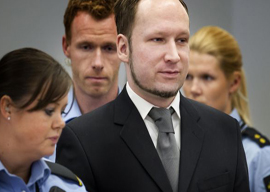 The government prosecutors”that is correct, the prosecutors“said that Breivik was criminally insane and therefore not criminally responsible. They argued unsuccessfully that he should go to a hospital rather than a prison. The defense attorneys, on the other hand, argued that he was mentally intact. They prevailed. This case was an odd inverse alignment of prosecutorial/defense opinion. But the question of sanity as it regards criminal responsibility extends beyond Breivik.

Why was the government determined to portray Mr. Breivik as insane? I suspect the answer is that insanity is a very easy and tidy explanation for everyone. The “insanity” label relieves Breivik of both legal and moral responsibility”he becomes merely another patient attended to by hospital doctors. It also relieves everyone in Norway of having to contemplate a criminal-justice system that is limited to detaining a murderer of 77 people to 21 years.

The 33-year-old Breivik”who reportedly lived with and was attended to by his mother prior to his rampage”will serve his sentence at Ila Prison near Oslo. He will have access to three separate cells”one for sleeping, one for exercise, and one for study. It’s sort of an extended bed and breakfast. No hard labor or bread and water for this prisoner. He will be able to read, write, keep himself fit, and perhaps, if we may be so hopeful, improve himself.

The father of one of Breivik’s victims, a 17-year-old boy, bitterly observed:

Now he’s going back to his boy’s room just with different walls, and exchanging his mother with a prison guard bringing him food.

Norwegians are most attentive to their prison population’s comfort.

Norway has a society that has nearly succeeded in trying to medicate morality. Maybe this is progress. I think not.