Mitt vs. Newt: the Gloves Come Off 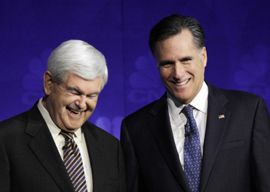 Mitt has suffered, too, from the malicious portrayal of his days at Bain Capital by Gingrich and Rick Perry, who portrayed Bain as a vulture sitting on a tree limb, looking for sick companies to swoop down on, pick the carcass clean and leave a skeleton.

Romney’s revelations last week that he pays only 15 percent of his income in federal taxes, that he has investments in the Caymans, that the $375,000 he earned in speaking fees did not amount to much and that he enjoys firing people—even if it was insurance companies—all feed into the caricature of a country-club Republican with nothing in common with people who live from paycheck to paycheck.

Wealth is not necessarily an impediment to political success. FDR, a Hudson Valley aristocrat, and JFK were men of wealth who did less to earn their money than Mitt did to earn his. But they carried it more easily.

When JFK was being attacked because his father, who amassed his pile in stocks and liquor, had poured huge sums into the West Virginia primary on his son’s behalf, Sen. Kennedy joked about it, telling the Gridiron Club that his father had sent him a telegram just before the primary: “Don’t buy a single vote more than is necessary. I’ll be damned if I’ll pay for a landslide.”

It is hard to recall a primary season that got this ugly this early. Words like dishonest, liar and corrupt, and phrases like serial hypocrite have come not just from independent and unaccountable super PACs but from the paid media of the campaigns and the candidates themselves.

The primary season that much resembles this one is 1964. Then, Gov. Nelson Rockefeller, icon of the Eastern liberal establishment that had imposed nominees Wendell Willkie, Tom Dewey (twice)  and Dwight Eisenhower on the party, lost the California primary and the nomination to Barry Goldwater.

Speaking to that divided convention, Rockefeller was booed and jeered from the balconies when he called on the delegates to condemn the John Birch Society equally with the Ku Klux Klan and Communist Party.

The party never came together that fall. Goldwater suffered a defeat unequaled since Alf Landon carried two states in 1936. The ideological divide between Romney and Newt is not nearly so great as that between Goldwater and Rockefeller, but the personal animosity is certainly approaching that.

With the Tea Party recoiling from Romney and rallying to Newt, and regular Republicans coalescing around Mitt, with dozens of primaries and caucuses ahead, Tampa just might end up looking like the Cow Palace in ‘64.