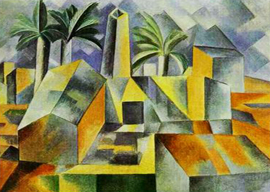 While we must reject modernism’s goal of reducing art to socialism’s ugly whore, we must also beware of reacting through a trite or mannerist realism, the other side of modernism’s wooden nickel.

Fred Ross is one of our nation’s most successful art collectors. His Art Renewal Center boasts an online collection of hundreds of important images and news of every realist studio that opens. Artists are drawing again thanks to Ross’s labors.

Fred Ross distinguishes between art and anti-art. He understands that all art is abstract, from Michelangelo’s frescoes in the Cappella Sistina to William-Adolphe Bouguereau’s virtuosic canvases. He knows that the impressionists could not hold a candle to the French academic painters.

Gallery owners here in Santa Fe have been dealing in Ross atelier artists for years now and even our local landscapists have put aside their facile neo-impressionism in favor of the new realism.

Ross exposed twentieth-century modernism as an outdated scam and has put the narcissistic Picasso and boring-as-dirt Matisse in their place. He says Picasso has become a religious idol to be venerated uncritically. Our adoring reaction to his jejune graffiti is thoughtless and reflexive, the result of Pavlovian conditioning imposed by state-funded academia rather than reason. Only decades of anti-humanist brainwashing can compel us to believe that ugliness, despair, angst, neurosis, disorder, and fragmentation are pretty.

But Ross seems unaware that modernism and American public education share a common framework of contempt and scorn for Western art’s Christian content.

Picasso’s support for communism during the Spanish Civil War was tacit and self-interested, although he voiced dislike of Franco, a hero who maintained Spain’s neutrality throughout World War II after sending Hitler packing. While communists were destroying priceless treasures of Spanish art, bombing some of the world’s most beautiful churches, exhuming dead nuns” bodies to display on the streets, and murdering bishops and priests, Picasso remained silent.

The monochromatic mural Guernica celebrated the violence. Modernists, after all, are men of revolution”fundamental transformers and destroyers.

In Paris, Picasso surrounded himself with leaden atheists, soulless worshippers of dead matter spending most of their time, like him, in the local brothels. He joined the French Communist Party in 1944 and later accepted the 1950 Stalin Peace Prize, an odd honor seeing as it came from a mass murderer responsible for the deaths of up to 60 million. Picasso remained in the party until death, even during the Soviet invasions of Hungary and Czechoslovakia.

For communists, freedom is only for artists and their masters.

But to read Ross, Picasso is evil because he was a cubist. Ross lacks the philosophical and historical background to comprehend modernism’s real purpose. While he recognizes that there is good and bad in art, he lacks the principles and definitions to help us with that.

Liberalism is a virus within all of us. The idea that the beautiful in art can be defined through objective criteria or that art is intrinsically moral will send some readers to the hospital for PTSD therapy”proof that 100 years of modernism have emulsified the human mind.