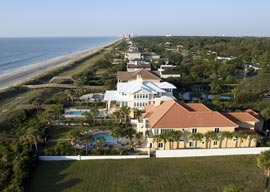 A widespread assumption, although not one that Chetty brings up, is that white political oppression is what’s keeping the black man down economically. For example, Chetty’s tenth worst county is Coahoma County in Mississippi’s cotton-growing Delta. The county seat is Clarksdale, home of bluesman Robert Johnson’s legendary crossroads where Highway 49 intersects Bob Dylan’s Highway 61. A couple of years ago, much of the national press became obsessed with implying that the murder of “Mississippi’s first openly gay mayoral candidate“ was the work of Clarksdale’s KKK-ridden White Male Power Structure cops, even though the black killer had already confessed to the black sheriff in a town with a black mayor.

So, black political power doesn”t seem to build much of a basis for prosperity for the next generation.

An extremely curious aspect of Chetty’s list is that many of the supposedly Worst Places in America to Raise Children had fast-growing populations between 2000 and 2010, often due to a mix of black, Hispanic, and white newcomers pouring in. For example, the third most economically depressing county according to Chetty, behind only two Indian reservations, was Forsyth County, North Carolina, whose county seat is Winston-Salem. Yet, Forsyth’s population has grown 19% since 2000, much of that black and Latino newcomers.

If Forsyth County, and the Carolinas in general according to Chetty’s results, are such hellholes, why did so many families move there? What does Chetty know that all these families didn”t know?

Let’s look at the whitest county among his Worst 25, Horry County, South Carolina, which is on the Atlantic just south of the North Carolina state line. We modern Americans can think more objectively about relatively white places like this Golf Capital of the World. Horry is home to the immense Myrtle Beach resort that features at least 91 golf courses on its Grand Strand. Despite Chetty’s assertion of its awfulness, Horry has grown 52 percent in population since 2000.

So, what was it about Myrtle Beach that made it bad for the next generation? Does golf undermine the moral fiber of youth?

Nah. The example of Myrtle Beach’s ups and downs just makes clear a recurrent problem with Chetty’s methodology: even though he’s claiming to find long-term verities about how best to organize communities, his findings are extremely susceptible to temporary local booms and busts. Chetty’s 1996-2000 baseline era represented a historic golf resort construction boom in Horry County, with unemployment dropping as low as 2.5 percent in 1998-99. In contrast, Chetty’s 2011-2012 measurement era was part of the collapse of golf course construction, with unemployment never dropping below 10 percent in Horry County from 2009-2013.

Not surprisingly, Myrtle Beach’s endless growth and low cost of living brought in large numbers of people in the 1990s for construction and tourism jobs. They did well in 1996-2000, but their kids wound up getting the fuzzy end of the lollipop in 2011-2012. But, lately, rich Chinese looking to buy American golf courses to launder their ill-gotten gains have discovered Myrtle Beach, so the future looks brighter than the recent past.

To sum up, blue collar Americans were doing well building golf condos in Myrtle Beach in the 1990s. But then golf went out of fashion, so the construction boom collapsed. But now Myrtle Beach is coming back because Chinese Communist Party white-collar criminals are really getting into golf.

In other words, one of Chetty’s big lessons is that if you are a blue collar worker, you should move to a county that will be booming a decade and a half from now for reasons you can”t possibly anticipate.

Sioux County is an impressive place, sort of the Palo Alto of the recent Midwestern farm boom that drove land prices up steadily from 2004 through 2013 (before dropping in 2014). It has fantastic soil for growing corn, and climate change has been making the local weather more beneficent over the last three decades. In late 2011, some farmland in Sioux County sold for a Midwestern record of $20,000 per acre, which would be $3.2 million for a typical 160-acre farm. Sioux County also has some cultural advantages, such as ethnic homogeneity (in 1980 it was found to be the most Dutch place in America). It’s also quite socially conservative, with 80 percent of the population belonging to churches.

While growers in California demand more illegal immigrants, Sioux County voters prefer to use productivity-expanding technology to do the work themselves. Republican Congressman Steve King, an outspoken immigration restrictionist, earned 83 percent of Sioux County’s votes in 2012.

Chetty’s 25 Best Counties for the working class look an awful lot like Sioux County. There are five more in Iowa, six in Nebraska, four in North Dakota (with its energy boom), three in South Dakota, two in Utah, one in Kansas, one in Colorado, one in Montana, and one in Wyoming.

Despite their prosperity due to recent booms in farm produce and energy, these rural counties aren”t attracting many new residents. While halcyon Sioux County, with its biotechnology industry, grew seven percent in population from 2000 to 2010, Chetty’s second best, Cedar County, Nebraska, has lost population in every Census after 1930. Productivity goes up constantly, so the most successful farmers buy out their rivals. It’s a healthy economic system, but not one that can absorb this country’s ever-growing population caused by immigration.

One lesson that Chetty is reluctant to draw from his data is that large-scale immigration appears to be bad for the American working class. His Top 25 counties are closer to the Canadian than the Mexican border.

A repeated theme that runs through Chetty’s latest paper is that white bread places like Minneapolis and Salt Lake City have more beneficial cultures than vibrant, diverse ones such as Detroit, Baltimore, and New Orleans:

For females in below-median income families, New Orleans has the lowest causal effect on family income; every additional year spent in New Orleans lowers their incomes by -0.285 (s.e. 0.098) percentiles, a reduction of 0.932%. In contrast, we find that Salt Lake City, Utah has the highest causal effect on the family incomes of females. Every year spent growing up in Salt Lake City increases a female child’s income from a below-median income family by 0.234 percentiles, or roughly 0.767%.

Put differently, these suggest that 20 years of exposure to Bucks County, PA as opposed to Baltimore, MD for males in below-median income families would increase their income by 44.7%.

Bucks County is a traditional bucolic escape for Manhattan literati. It’s where Oscar Hammerstein II taught his foster son Stephen Sondheim how to compose Broadway musicals. Freddie Gray would not have felt at home in Bucks County.

The highest-ranking large county on the list is DuPage County, Illinois, a set of leafy Chicago suburbs west of O”Hare Airport. DuPage is a convenient place to live and work if you are a corporate frequent flier. DuPage has everything you”d expect in an upscale county: I almost bought a house there a few times and played golf there many times.

But a close inspection of Chetty’s tables suggests DuPage just stumbled into the top ranking due to fortuitous economic cycles rather than underlying permanent cultural or policy differences. Telling evidence is that DuPage’s own Western suburb, Kane County, which is to DuPage County as DuPage is to Chicago’s Cook County, did miserably, ranking 2239th out of 2478 counties.

DuPage is a mature suburb with a vast number of stable corporate jobs, but little population growth (up only one percent from 2000 to 2010) due to zoning and high home prices. In contrast McHenry County was a fast growing exurb (up 28 percent in population from 2000 to 2010). But, like most exurbs in 2008, McHenry got hammered by the mortgage mess and the rise in gasoline prices, drying up construction and realtor income. McHenry’s unemployment rate had dropped as low as 3 percent in 2008, but was running close to 10 percent in 2011-2012 when Chetty measured incomes.

On Chetty’s list of the best counties for the Upper Half of the population, Fairfax is, by far, the highest ranked large county. Fairfax has always been prosperous, but lately it’s started to look like The Capitol in The Hunger Games.

Because of 9/11. The War on Terror poured hundreds of billions upon the Beltway Bandits, many of whom live in Fairfax County to conveniently serve the CIA and Pentagon.

In other words, when choosing where to move your family when looking for blue-collar work, you should attempt to accurately forecast bizarre world-shaking historical events that will direct colossal economic windfalls upon some places while squeezing others dry. Try to anticipate what supervillains lurking in caves are plotting.

The example of Fairfax points out that Chetty’s lists are driven by post-hoc reasoning. Back in 1996, both Myrtle Beach and Fairfax County looked liked they”d have pretty good futures, but the South Carolina golf resort was unexpectedly cratered by Baby Boomers aging out of their Golf Phase, while the CIA headquarters” home county was lavishly rewarded for failing to anticipate what Osama bin Laden was up to.

Post-hoc reasoning isn”t useless. For instance, Pine Ridge will probably continue to remain a messed-up place until somebody discovers natural gas on it or somebody else figures out a biochemical solution for Native Americans” propensity toward alcoholism.

The worst places for the upper half of the income range are, by Chetty’s calculations, a mixture of Indian reservations, black counties, exurban counties that got slammed by 2008 before they could mature (e.g., Orange, North Carolina, home of the U. of North Carolina), and, most interestingly, huge multicultural immigrant-heavy cities like D.C., New York, and the more multicultural counties of the Southern California megalopolis.

Some of this is just an artifact of Chetty’s repeated refusal to adjust for cost of living differences. Many Angelenos, for instance, moved inland to San Bernardino and Riverside Counties, accepting a lower salary to get a lower mortgage, while natives of the Inland Empire in turn moved to even cheaper places such as Texas.

In summary, Chetty’s data still suffers from crippling problems with:

– Regression toward the mean (especially among races)
– Temporary booms and busts
– Cost of living differences.

Yet, these should not be impossible challenges for him to overcome in future iterations.