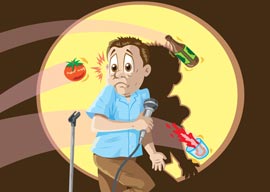 Like everyone who wants to “change the world,” Kids These Days really want to control it. They”re moral anorexics who”ve put the body politic on a strict starvation diet of fetishized, Maoist catchphrases and robotic right-think.

Even their heroes aren”t quite safe: Vulture and elsewhere obediently autopsy every new C.K. or Schumer offering, weighing each joke to see if it conforms to this week’s regulation levels of progressive social-justice propriety.

(God, I”m so looking forward to the Bill Cosby-fication of Louis C.K. sometime around, oh, 2021. That”ll show the little brats…)

Speaking of tinkering: If George Lucas and Stephen Spielberg can retroactively nice-ify these college kids” childhoods”so that Han doesn”t shoot first, and the bad guys carry walkie-talkies instead of guns”why, millennials must be wondering, can”t this Seinfeld guy go back and rejig “The Chinese Woman” to suit their delicate sensibilities?

Thing is, I wouldn”t be heartbroken if Seinfeld never aired a single rerun again, either. I”ve long been convinced that the mean-spirited “show about nothing””of a piece with co-creator Larry David’s later Curb Your Enthusiasm“has been a greater wellspring of contemporary anti-Semitism than every Resistance Records release stacked on top of one another.

But when I say this in all seriousness to my Jewish friends, they just laugh at me and roll their eyes. They think I”m pretty funny for a shiksa.

Meanwhile, back at Margate, ride restorer Littleboys is “especially proud of the Zodiak Jets, spinning rockets that are operated by passengers pulling a lever to zoom up into the air, and which he says “you will very much have to hold on to.””

Uh-huh. I give that a week.