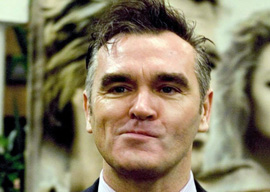 Whether or not Morrissey is a fascist is easily answered in the negative. Whether or not he’s a racist has the same answer as it does for everyone else: What the hell does “racist” even mean? Most of his art school fans might find his views absolutely haram. However, his praise for Galloway and Bernie Sanders wouldn”t win him many fans in the alt-right’s anime reich. So what gives?

Morrissey is an oddball, for sure, but he’s also a working-class Mancunian. Prior to becoming a mononym (so chosen because he”d never heard of a singer who used only their surname), he was Steven Patrick Morrissey, the son of Irish immigrants to the United Kingdom. He grew up in council housing and developed an early obsession with Coronation Street, as well as British kitchen-sink realism in cinema.

His “80s band, the Smiths, displayed a rather relentless infatuation with British culture and what might be termed implicit whiteness. James Dean, stills from kitchen-sink realist cinema, Coronation Street, Billy Fury, and a very young Elvis Presley all make appearances on their record covers. Musically, the band purged post-punk and new wave’s reggae, disco, and funk flourishes. Instead, they took their cues from the Byrds, “60s girl pop, and rockabilly filtered through bands like the Cramps, the New York Dolls, and the Pretenders.

These days Morrissey sports suits, heavy gold chains, and mutton-chop sideburns. He’s effectively what you get when you hand a working-class Northerner a pile of money.

When you understand this, every single one of his flaps makes sense. When he says, “Obviously to get on Top of the Pops these days, one has to be, by law, black,” he’s not being “fascist,” he’s just saying what most of the displaced British working class think and even whisper among themselves if they think no one is watching. The British press pillory Morrissey anytime he dares to denounce the way animals are treated in China or says that maybe a Britain full of non-British people isn”t very British anymore because he’s a convenient proxy for the rest of the British working class they make a living off of hating.