My Mother the Nurse 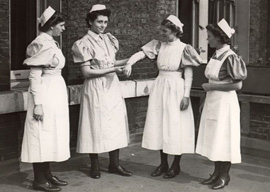 There was a good deal of mutual back-scratching. Drug cupboard secrets were freely shared. The nurses, healthy young women on derisible pay, possessed of detailed instruction in anatomy and physiology, were not best known for the strength of the elastic in their knickers. There was a steady demand from junior nurses, who had no drug cupboard key, to senior ones for abortifacients. Mum once confessed to me that I was a failed abortion. It was wartime. My parents were poor and living in cruddy rented rooms. One more baby would have been a burden. I suppose she got the wrong bottle, or perhaps my own life force was too strong (hard to believe, in my current condition), or possibly some cosmic principle was at work.

For a person steeped in medical matters all her working day, Mum’s domestic pharmacopeia was rudimentary. For pains there was aspirin; for burns and scrapes, Vaseline; for insect bites, calamine lotion; for digestive upsets, Andrews Liver Salts. There was something called tulle gras, which I think means “fat gauze””I’ll leave you to look it up. Suppositories were occasional visitors. (“Bullet for liberating masses””Chairman Mao. And I’ll assume we all know the Italian for “suppository,” yes?)

This brisk reductionism was of a piece with the general medical outlook. Just as the rich are different from the rest of us in having more money, so medical folk are different in having a much longer and closer acquaintance with suffering. Naturally they erect defenses. This doesn’t make them callous, but it puts a tight bound on their sentimentality. If they turn into writers, as many have done, it gives their prose a spare quality I like very much.

Mum was a loving and tenderhearted woman”I can find no fault with her as a parent. She too had her defenses, though. After some brief experiences before her marriage, she would never do children’s nursing: “I can’t bear to watch the little ones die.” She ended her career in a geriatric ward, where perhaps she sometimes ventured to the edge of callousness. Very few patients go bounding out of a gerry ward cured of all their ills. Mum told me that if one of the patients died toward the end of a shift, it was common practice to pack him round with hot-water bottles and leave it for the incoming shift to do all the paperwork. Mum: “Makes no difference to him, poor devil.”

In my mind’s eye now, I am behind the sofa in our living room, playing with my construction set, listening to the nurses’ gossip. There are worse ways to get a first acquaintance with life. Thanks, Mum.