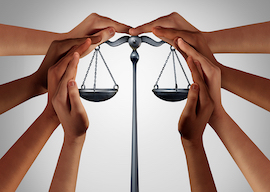 Okay, sports fans, get your wallets out and start giving. That’s the latest brainstorm from a New York Times columnist who makes however unconvincing a case for reparations to black people. For slavery, that is. And that means you, whitey—or brownie, and I guess that goes for yellow ones also. He wants these reparations to be legislated into law, and everyone except African-Americans has to pay. His idea is hardly original. Race hustlers like Al Sharpton and Kamala Harris, even Jesse Jackson, have been dropping heavy hints for years. Black Americans want money, and the rest of us have to give it to them, “punto basta,” as they say in the land of pasta.

The media has managed to impose a kind of groupthink that tells us that America is rife with racism and bigotry, but looking around and watching television, the only racism I seem to notice nowadays is the one against whites who go to church and raise law-abiding families. Watch any Netflix or Amazon series and you’ll see what I mean. (Better not watch it, actually.) The priest is always a pervert, the religious families are selling drugs on the sly, and all cops and soldiers are rapists, racists, and bigots. All criminals are white, blond, and sporting Nazi tattoos. Well, you know the rest. Political correctness and diversity training have now become standard, and lockstep conformity is the order of the day. The media is most responsible for spreading this plague, and now we have a columnist for a malignant, anti-Christian, antiwhite, anti-male newspaper suggesting that we are all responsible for slavery and should lighten our wallets.

George Orwell had it right in 1984, except Big Brother turned out to be the media, controlling our thoughts and condemning anyone who steps out of line. Nabokov’s Lolita would land him in jail today, not that it would get published. The sisterhood would lynch the publisher. But 1984 is here, and all one has to do is read the news and watch political programs on television. There is social oppression and narrow dogmatism against anyone who doesn’t toe the PC line, in fact anyone who dares utter those four letters of MAGA. Who would have thought the massive yearning for, and pillar of what America stands for, freedom of speech, would be done away by a bunch of lefty greaseballs masquerading as journalists and pundits.

“There is no such thing as a collective inherited crime.”

The unprecedented media hostility and the Deep State’s determination to depose the 45th American president is indicative of how far the unelected will go to do away with the majority’s choice. Far-left radicals are now calling the tune, and the Fourth Estate is acting as their mike. All restrictions on immigration are deemed racist, and the distinction between legal and illegal immigrants has been erased. And now some moron wants to make wage earners pay reparations.

One Ms. Blum writing to the Times compared the U.S. to Nazi Germany, praising Germany for, after the war, paying reparations to her family, who not only survived, but immigrated to America and are collecting to this day. America has sinned and has done nothing about it, is her message. (Knowing her kind, she might follow Ms. Warren’s example and claim to be a Red Indian, and collect.) The trouble with reparations is they don’t work—they exacerbate rather than heal. The process of deciding who deserves reparations would bring on another civil war, this time between those who receive and those who don’t.

And what about all the immigrants who arrived after slavery was abolished? What about me? I arrived here in 1948 and never owned a slave, although lots of females have accused me of asking them to act as slaves. (I don’t cook, don’t do laundry, don’t take the kids to school, and insist the fairer sex does the driving. I also only see movies I like, and always take the window seat on first-class travel.) In fact, I think the dreaded Turks who occupied Greece—not where I come from on the Ionian, we were under Venice—should pay reparations because they enslaved Greece for 400 years, a bit longer than slavery existed over here.

There is no such thing as a collective inherited crime. The call for reparations is a con trick by African-American race hustlers, or a Times jerk desperate to show his liberal, bleeding-heart credentials. Nothing more. It is bullshit of the kind one encounters every day in places like New York and Los Angeles, and as a very wise man once reminded a black firebrand who called America the most oppressive state in the world, “There is always Liberia and other African countries who would welcome you with open arms.” Incredibly, there were no takers.

Best of all is the notion that although no one today is guilty, assuming American citizenship also means taking on the liabilities of the American past. Actually, what the Times hack wrote about national sin and a national reckoning for that sin leading to a spiritual renewal is probably the easiest way to throw up if you have an upset stomach through too much drink or bad fish. National reckoning, my eye. Less PC bull would renew our spirit quicker than you can say “MAGA.”