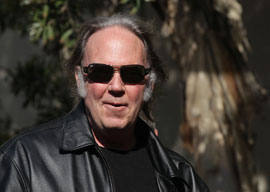 He’s still driving it around, though, and he recently took the hybrid to Washington, DC, where he opined about Big Oil and all its pomps and works:

I am against the Keystone pipeline in a big way. The fact is, Fort McMurray [Alberta] looks like Hiroshima. Fort McMurray is a wasteland. The Indians up there and the native peoples are dying. People are sick. People are dying of cancer because of this. All of the First Nations peoples up there are threatened by this. Their food supply is wasted, their treaties are no good. They have the right to live on the land, like they always did, but there’s no land left that they can live on. All the animals are dying.

Almost every word of this is a lie.

Fort McMurray looks like this, which may be someone’s idea of a “wasteland””a young Joe Strummer’s, perhaps?”but it’s hardly a shattered post-nuclear nightmare.

(Not even Hiroshima looks like Hiroshima anymore, come to think of it. Maybe Young should’ve said “Detroit.”)

Many of those “Indians and native peoples” have no interest in “living on the land like they always did.” They actually work for the oil industry in sizeable numbers and earn enviable salaries doing so. Judging by the girth of the average Canadian aborigine, their “food supply” hasn’t been in jeopardy for some time.

The Fort McMurray “cancer epidemic” was a hoax perpetrated by a local doctor and debunked a few years ago by Health Canada, the Alberta Cancer Board, and the Royal Society of Canada.
Anyhow, in protest, the local radio station banned all Neil Young songs, first for a day, then “indefinitely.” This sounds like a great idea until you realize that thanks to CanCon rules, the station will have to substitute other Canadian music to avoid losing their license.

Poor Fort McMurray. It may not look like Hiroshima, but it sure is gonna sound like Loverboy for the foreseeable future. The living may very well envy the dead.