No Tweets for Turkey 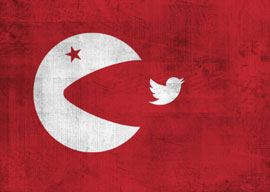 Tensions have been rising between Mr. ErdoÄan and Mr. GÃ¼l (formerly political allies and both founders of the governing Justice and Development Party) since ErdoÄan announced in the run-up to the 2011 Turkish elections that he was intending to revise the 1982 military-written constitution. A key element of that revision was to be the substantial transformation of the role of the president from that of figurehead to that of full executive. He also announced that he would run for president in 2014. It is, one imagines, purely coincidental that Mr. ErdoÄan is currently barred by his party’s constitution from running as prime minister in the next general election.

He is not the first person to try to quash rumors by stamping on the obvious source. It has always been the default reaction of a considerable part”perhaps the majority”of humanity. I am sure it has on occasion been successful, although that’s hard to prove. Mostly, it has not. History is littered with scandal and gossip. Consider Caesar. He may have defeated Pompey and the optimates; he may have had himself created dictator perpetuo; he may even have had Cleopatra. But he couldn”t stop people sniggering over the old rumor that he had had a youthful affair with King Nicomedes IV of Bithynia. Caesar, unlike his wife, seemed never to be above suspicion.

The current rumors in Turkey are of considerably graver import than that and are certainly not a matter for ribald amusement. But until they are proved or disproved they will continue to spread, and often, like Chinese whispers, they will deepen and distort as long as people are interested. In matters of harmless import, people eventually get weary, and, if one brazens it out, one can move on. However, where the subject is much graver, particularly in the adversarial world of politics, and especially when the premiership is involved, that won”t work: Consider the Swift Boat affair in the 2004 US presidential campaign. One might hope that a full and public inquiry in such instances can hope to end the matter for good, but sometimes not even that will do.

Either way, Recep Tayyip ErdoÄan has done the worst possible thing for someone in his situation. Not only has he made a completely ineffectual strike against an unassailable foe, it was also the sort of move more reminiscent of megalomaniacal dictators than of modern democratic leaders. It’s particularly sad given his tremendous achievements when he was mayor of Istanbul and in the earlier years of his long premiership. Civil unrest is a dreadful thing, but from purely selfish motives one should note Turkey’s tactical importance as NATO’s only member with an insider’s voice in the Muslim world, as well as its strategic location on the Black Sea opposite Crimea. Banning Twitter was not a constructive move. A little less action, a little more conversation, please.