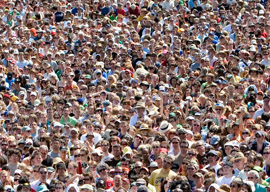 One lives in Aspen, where I’m guessing there’s not a strong Tea Party presence. Not a lot of “diversity,” either, whether racial, economic, or otherwise. You’d probably find more divergent thinking among the Amish.

Schiller’s above quote was spoken with a feigned incredulity and nervous titter while shooting a wan little “please like me” smile toward the pretend Muslims. The mention of their Muslim Brotherhood connection didn’t raise a “non-bigoted, non-racist” NPR eyebrow.

The “anti-intellectual” comments by Schiller are an interesting gripe, rife with implied classism, elitism, and -isms galore, including, I’ll say it, racism.

To begin with, he obviously fancies himself an “intellectual” as opposed to “this very large uneducated part of the population that carries these ideas.”

Migrant workers, for instance? Poor blacks? Native Americans on reservations? They’re the enemy, too? Or just the white ones?

One of the more fascinating inconsistencies among the self-perceived “educated elite” is the gleeful scorn and derision heaped on Christianity unless it’s black Christianity. Suddenly Christianity is kinda neat, kinda cute.

Whites are to be scorned and reviled for their antiquated, backward beliefs. Blacks are to be patronized and indulged in their quaint customs and colorful superstitions.

We read you loud and clear, educated ones.

The other NPR-er in the video, a Betsy Liley, tells the already anti-American (so far as she knows) Muslim fellows: “We put Japanese Americans in camps in World War II.”

What’s she bringing that up fer? Eat your micro-green salad with balsamic reduction and shut up.

It’s like Democratic Congressman Jim Moran telling an Arab television network in January that we’re a bunch of racists.

Why not tell foreigners who aren’t crazy about us to begin with that we’re pretty nice and want to be their friends? Reprazent, for goodness” sake.

Just don’t “go and lay your hands on a Pittsburgh Steeler fan,” to quote Charlie Daniels (In America), and we cool.

Besides, it was their party who put Japanese Americans in concentration camps during World War II.

They”re also liars. All they wanted was for Juan Williams to sing Go Down, Moses for them, and they know it.