Obama and The Bell Curve 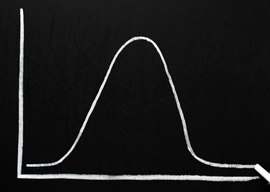 And much the same is true for our current president.

Indeed, until he was rescued by the Law School Admission Test, Obama had been floundering“encouraging recycling, copyediting a business newsletter he despised, failing to organize a public housing project community. Then, around 1987, he apparently scored high on the heavily g-loaded LSAT.

According to a clever 2012 analysis by Alan R. Lockwood, Obama likely scored in the 94th to 98th percentile range. This, combined with Obama’s black privilege and Harvard legacy status (Barack Obama Sr., M.A. “65), allowed him the luxury of applying to only the top three law schools, Harvard, Yale, and Stanford, with no need for a safety school.

Once at Harvard, Obama was instantly recognized as one of the few black students who were on the same cognitive level as the students who got in without affirmative action. (Nationally, the average black who takes the LSAT scores at only the 12th percentile compared to whites.) Obama’s ego blossomed as he became talked about as the First Black President. A classmate who had been in the 1970s rock band the Runaways compared Obama’s new self-image to Joan Jett’s.

But when Obama went back to Chicago’s South Side, his career got sidetracked once again. Even while he was being lionized by Chicago’s Jewish and WASP elites as a potential president, his political bandwagon was spinning its wheels because black folks didn”t much like him relative to other, more authentically black politicians. After a depressing defeat in 2000 at the hands of former Black Panther Bobby Rush, Obama realized that while black voters in his Congressional district considered him an overeducated Urkel, white voters in the larger world thought he was the one they”d been waiting for.

When Obama gave the keynote address at the 2004 Democratic Convention, the white public nationwide finally discovered a black state legislator with a high LSAT score. This was such an edifying find that within a half decade, they”d made him President.

In the White House, however, Obama has once again proven less than galvanizing. Why? As Herrnstein and Murray repeatedly cautioned 20 years ago, IQ isn”t everything.