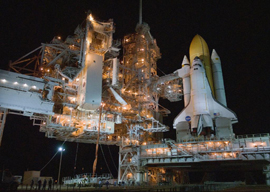 Tomorrow marks the closing of perhaps the most magnificent period of human achievement in all of Earth’s lengthy span.

On Friday, America’s final space shuttle shall rocket into orbit for the last time. After returning home, the four shuttles which once conquered the heavens will battle rust as they gather dust adjacent to airports or in little-visited museums.

Euphemistically the reasons for eradicating one of the greatest accomplishments in recorded history are budgetary. Political malaise and shortsightedness exist under the pretense that the funds might be better spent on the ground.

This is a blatantly transparent argument considering that everything from integrated circuits, cell phones, MP3 players, GPS devices, MRIs, LEDs, smoke detectors, cordless tools, joystick controllers, cochlear implants, scratch-resistant eyeglasses, the Internet, flame-retardant clothing, freeze-dried foods, TV satellite dishes, and a host of other utilities both common and technical are direct fruits of the labors spent in creating and maintaining a space fleet.

“In the face of repetitive evidence of their loathsome inabilities, all who cannot achieve or emulate must annihilate.”

The budgetary excuses for grounding the space program are all mere affectation. The reason for this gross betrayal of human progress is itself distinctly humane. One may even say it is particularly so.

The reason is that the people who made the space administration successful did not resemble its leader. This continual reminder of the limits of “empowerment” and “diversity” could not but be destroyed. In the face of repetitive evidence of their loathsome inabilities, all who cannot achieve or emulate must annihilate.

To that end the American space program was dismantled, in all likelihood permanently. There will be a minor staff functioning with the government promise that full operations will resume within five years. One should put extraordinarily scant stock in this guarantee.

In the meantime, the talented and the brilliant will gravitate to foreign spheres, where such traits still account for something. In America, these former attributes are likely only to result in having one singled out for censure, ridicule, or reassignment to some non-threatening beige cubicle in the dank corner of an innocuous suburban office.